When my new four-wheel-drive Forester 2.5 XT long-term test car was delivered to Evo Towers, the first fall of winter was swirling around outside my window, cloaking the ground with its chilly blanket. Serendipity? Up to a point; I was at home some 25 miles away, with something rather less appropriate sitting on the driveway. 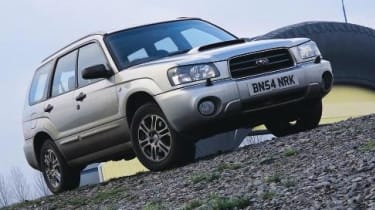 When my new four-wheel-drive Forester 2.5 XT long-term test car was delivered to Evo Towers, the first fall of winter was swirling around outside my window, cloaking the ground with its chilly blanket. Serendipity? Up to a point; I was at home some 25 miles away, with something rather less appropriate sitting on the driveway.

After a year with the utterly marvellous and determinedly impractical Clio V6, I had a need for something more practical but still fun. In a couple of months Baby Barker No.2 will need ferrying to nursery along with No.1, and having driven the Forester on the launch I reckoned it would fit the bill. Five doors, easy-clean leather as standard, a soothing engine note and a very supple ride was how I sold it to Mrs B. I may have failed to mention the 207bhp 2.5-litre turbo flat-four, the 140mph potential and the playful handling.

Of course, a five-door Impreza WRX is cheaper, pretty much as roomy, a bit quicker and more obviously sporting, but part of the Forester's draw is precisely that it's not an Impreza yet has much of its distinct, appealing character. And it's more useful when it snows. Yet, while it would have been satisfying to have driven home through the slush on the day it was delivered, to have felt the confidence inspired by a ground clearance and drivetrain designed to deal with such conditions, I don't believe they're the asset they could be. In my experience, when other traffic is wearing slip-ons, your hiking boots aren't much use. I'm sure proper four-wheel-drive cars make sense in the dales and glens, but when there's snow in the east Midlands, you get stuck in the same jams as everyone else.

So why have a four-wheel-drive? Well, unlike the majority, which are front-drivers that send torque to the rear only when the fronts can't cope, the drivetrain of the Forester is permanently engaged, and its handling has been set up to exploit it. It needs to be, because with 207bhp and 236lb ft the 2.5XT is the most powerful and torque-rich Forester yet, and although the drivetrain distributes it democratically, the responsibility for getting it to the road rests with the plump Yokohama Geolandar G900s - a very ordinary road tyre.

The Forester seems to have the grip of a classic car, and you drive it like one, aware of the feedback from each corner, steering smoothly and squeezing on the throttle. It's as if the car is dancing on its toes, and with so much grunt on tap, it will exit roundabouts with its nose high and its tail squatting, modestly oversteering. Curiously satisfying.

That's a pretty good metaphor for the whole car. Now that it's been run in and had its first 'free' 1000-mile service (£40 for oil and filter), it's deceptively quick when you wring it out, partly because it's so smooth and quiet but also because you sit high up. The engine felt a bit soft in the mid-range at first but now it has 1500 miles under its belt it seems to be stronger across the whole rev- range. I'm hoping the shift of the five-speed 'box will get more slick with miles but I've few complaints.

Even before the XT arrived, my old friend Mike Wood from Prodrive was on the phone wondering if I might be interested in enhancing its abilities, offering more grip, more power and more noise. Right now I'm enjoying the Forester as it is but there's certainly scope for sharpening it up a bit without compromising its nature.