More power, extra kit and an even more supple ride add to the charms of our favourite SUV 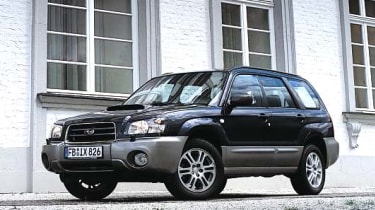 We've always had a soft spot for the Forester. It's a sort of workman's Impreza, offering the character of the sporty saloon with go-anywhere practicality and, being a semi-utility, high-rise estate car, it doesn't attract the same attention. Despite appearances, in turbocharged form the Forester's pace isn't that far short of an Impreza WRX, and the handling on semi-off-road tyres is huge fun - sort of low-grip, slo-mo Impreza. Until now, the most powerful Forester had 177bhp but that changes with the new 2.5XT which, as the name implies, has a 2.5-litre flat-four instead of the 2-litre versions that have served before. Power leaps to 207bhp, which is almost exactly what the original '94 Impreza Turbo had, while torque gets an even bigger hike to 236lb ft. Yet the tyres are still those plump, doughnut-like Yokohama Geolanders that seem to produce more squeal than grip on dry asphalt. There has been some detail design work but essentially the Forester is the same elevated, boxy five-door it has always been. There are new 16in alloys for the 2.5XT but it's inside that the generous specification of the new range-topper is most noticeable. The basic architecture is solid and sensible but there's leather for the seats, a chunky little leather-rimmed Momo steering wheel (same as the new Legacy spec.B's), flashes of titanium-coloured trim and a large-screen sat-nav system, all of which are standard. There is also, note, a speedometer marked to 150mph. With a low window-line and a raised driving position courtesy of the high ground clearance, the Forester is a car that makes you feel in control, and there's also something relaxing about the deep, distant throb of the horizontally-opposed engine. Early miles through town cement the easy-going nature of the Forester; it has wieldy steering, a light clutch and slick five-speed gearshift. Best of all, it has a very supple, cosseting ride the like of which you won't find even in today's most luxurious saloons. All of which lulls you into thinking that the Forester is a harmless, comfortable SUV, an impression that vapourises the first time you summon up full boost. There's decent off-boost torque to help mooch around town but when the turbo spools up the slam in the back is shocking. The Forester's nose rears up, its tail squats and it punches forward with a muted, Impreza-like bellow. What makes this interesting is that the body control of the 2.5XT feels as fluid and softly damped as any other Forester's, presumably to help the suspension compress over boulders and drop into gullies to maintain grip and drive when you're off-road. If you're not expecting huge pitch and roll angles and modest grip on the road, the first time you attack a second-gear corner it can feel like you're soon going to be testing its off-road ability. The nose responds lazily to steering inputs then dips strongly, the tyres howl and if you get back on the power mid-corner and catch full boost the front lifts up again and the front tyres scrabble at the tarmac. But the seats offer good support and you soon get used to factoring roll and pitch into the cornering equation. There's so much torque on offer from 3000rpm that you can meter out the urge and make cornering calmer and consequently faster, but if you're keen enough you can also hustle the Forester into mild, satisfying drifts. The Forester is hugely likeable. Subaru claims 0-62mph in 6.0sec and 140mph all-out, and it feels good for it. At £25,000 the 2.5XT isn't cheap - a five-door Impreza WRX is £20,495 - but as well as hide, sat-nav, and a six-CD stereo, you also get off-road ability as standard. And unlike the even more powerful STi versions that have been sold only in Japan, the 2.5XT combines stealthy speed with effortless, supple town manners. There's nothing else quite like it.