The fastest Renault ever and a masterful hot hatch 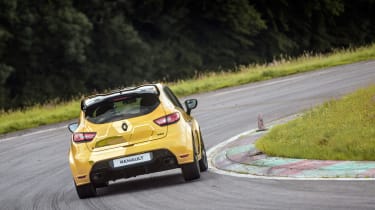 The R.S.16 is probably the fastest and most hardcore small hot hatch ever. Packing the 271bhp engine from the Renaultsport Megane 275 Trophy-R into the smaller, lighter Clio bodyshell has resulted in Renault’s fastest road car to date.

It’s just a concept for now, however, and according to Renaultsport the R.S.16 hasn’t yet been signed off for production. We’ll be very surprised if the French marque doesn’t eventually build a batch of 200-300 customer cars, though.

For the time being, then, the R.S.16 is billed as a celebration of 40 years of Renaultsport. It’s also the latest in a long and illustrious line of slightly unhinged high performance road cars from Renault, following the likes of the 5 Turbo, Spyder and Clio V6 models.

An enormous amount of work has gone into squeezing the Megane’s 2-litre turbo engine into the Clio’s engine bay. Even more work went into persuading the engine and chassis electronics to talk to one another, which the engineers describe as being the biggest challenge of all.

The 1998cc engine is good for 271bhp and 265lb ft of torque. They’re hardly the most impressive numbers in the hot hatch world these days, but that is an unprecedented amount for power for a B-segment hatchback.

The Megane’s six-speed manual gearbox is carried over, too, as is its limited slip differential. The standard Renaultsport Clio uses a hefty twin-clutch gearbox, which means the new drivetrain is actually no heavier overall. The R.S.16 runs a lightweight Akrapovic exhaust system. 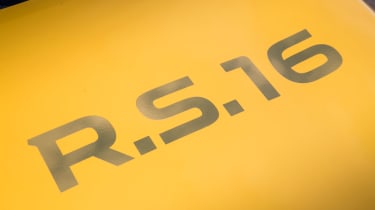 The engineers have gone to town on the car’s chassis, too, completely redesigning its front and rear axles. The R.S.16 runs ‘PerfoHub’ double kingpin struts on the front, borrowed from the much-loved previous generation Renaultsport Clio, which were designed to cope with high power and torque loads. A bespoke component was constructed to marry those struts to the Megane 275 Trophy-R’s hubs, which has enabled the engineers to fit that car’s high performance brakes.

The rear beam, meanwhile, is the heavily reinforced item from the Clio R3T rally car, which meets the lateral and camber stiffness requirements. The front and rear track widths have been increased by 60mm, while the dampers are high-specification Ohlins parts.

The wheels and tyres are borrowed from the Trophy-R, too. The 19-inch wheels are lightweight Speedline items while the tyres are track-biased Michelin Pilot Sport Cup 2s.

The Trophy-R’s bucket seats and six-point harnesses have also been fitted and although the show car does without a rear bench seat, Renaultsport suggests it’ll be an option should the car reach production. The large rear wing, finally, is borrowed from the Clio Cup racing car. 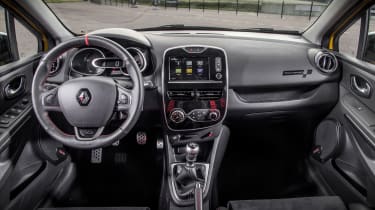 A B-segment hot hatch has never before had this amount of power, nor this level of chassis technology. This first drive was just a brief taster on a low-speed handling circuit, so although we weren’t able to learn everything we wanted to about the R.S.16 there are still good reasons to believe it could be the fastest, most exciting small hot hatch ever.

Renaultsport’s engineers are keen to stress that should the car make production there will be further development and fine tuning, particularly to the steering system. Although this show car’s helm isn’t bad by any means, a touch more feedback and physicality to the steering wouldn’t go amiss.

In almost every other sense, though, the R.S.16 is a genuinely brilliant track machine. The buckets seats and harnesses clamp you in place, which makes all the difference on circuit, but the standard Renaultsport Clio steering wheel feels a touch low-rent. A suede item, like the one found in the Trophy-R, would be much more appropriate.

The Cup 2 tyres find masses of grip, but they don’t quite wipe out all understeer. You have to be sure to neutralise the push on the way into a corner by managing entry speeds and trail-braking into the apex, which draws a delicious neutrality out of the chassis. The R.S.16 doesn’t have the same degree of oversteer built into it as the rather wild Trophy-R, but this remains an adjustable and playful chassis. The neat, uniform wear across the rear tyres shows how well this car works its back axle. 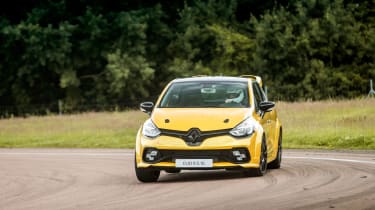 The R.S.16 is brilliantly agile and responsive and body control is very good indeed, particularly in quick direction changes. In this small circuit’s few quick corners the R.S.16 feels very well settled and it holds a tight line, too, which means you can carry lots of speed through bends. Over the bigger kerbs, meanwhile, the chassis is plaint enough to not be skipped off line.

The differential finds good traction, but it doesn’t quite lock up enough to allow you to give it full throttle away from second gear corners – the inside wheel lights up and smokes its tyre. On this smooth track there isn’t any sign of torque-steer, though. The engine, meanwhile, is strong and responsive and the gearshift is tight and direct. The Akrapovic exhaust emits a distinctive blast-furnace sound, but it’s certainly not tuneful.

The lasting impression is that the R.S.16 is a massive amount of fun to drive on track – playful, fast and brilliantly rewarding.

Should the R.S.16 reach production it’ll likely cost in the region of £34,000, which would make it more expensive than the likes of the Ford Focus RS, VW Golf R and Honda Civic Type R.

The new £32,000 Mini John Cooper Works Challenge would be a direct rival because it too is a very limited edition, track-focused hot hatch. The Renaultsport outguns the Mini by some 43bhp, but both use Michelin Cup 2 rubber to achieve very high levels of on-circuit performance.