A more interesting, incisive drive than the standard car, but stops short of being fun 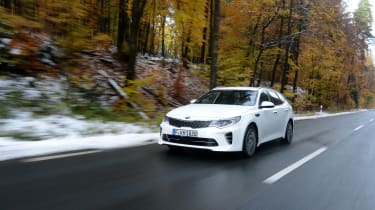 You get the sense from Kia that bosses are peering over the fence with envy at sister brand Hyundai. Albert Biermann, former BMW M-division boss and now head of Performance Development at the Korean group, is fast pushing through a high-performance ‘N’ sub-brand for Hyundai. Kia, however, has been forced to make do with just one cooking model in the form of the Cee’d (and three-door Pro_cee’d) GT, until now.

The brand revealed an expansion of the GT concept, which will start in the next few years, and the first car produced from that plan is this flagship - the new Optima GT. It’s a bit of a curious one, as many manufacturers (such as Ford and Mazda) have stopped making fast mainstream saloon models. However, the hot Optima is destined for Europe in saloon and estate form, and we’ve driven it for the first time on German roads.

Kia has introduced a new petrol unit for the GT, a 2-litre direct-injection four-cylinder, turbocharged unit producing 242bhp and 260lb ft of torque from as little as 1,350rpm. In the Sportswagon estate, that’s sufficient for a 0-62mph time of 7.4sec and a top speed of 149mph. We’re not talking BMW M-car pace here.

However, a Kia insider told us that Biermann’s desire is to boost the GT’s peak power output upwards of the 280bhp mark for right-hand drive markets, allowing it to compete with the likes of the Skoda Superb 280. The Optima GT is front-wheel drive only and comes with just one choice of transmission, a six-speed single-clutch automatic gearbox.

There are a number of chassis revisions over the standard car; it rides 15mm lower and there are revised bump stops and spring rates to sharpen the handling. This is also the first Kia to feature electronic adaptive dampers, offering three driving modes. The steering has been retuned for better responses and improved feedback, too. Bigger brakes complete the round of modifications. 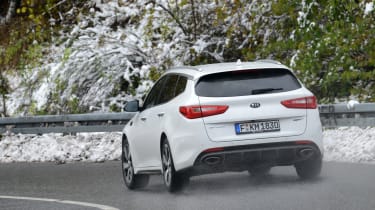 Better than you might expect given the anodyne dynamics of the base car. Kia knows more about setting up a warm GT car than you might expect. as is evident from the more than likeable Procee’d GT, a car we’ve ran in our Fast Fleet for almost a year. The Optima GT isn’t as pure or as fun as the smaller hatch, however.

> Click here to read our review of the Kia Proceed GT

You could argue that 242bhp in a large estate isn’t really enough to warranty any sporting pretence, and you’d be right. The Optima is moderately brisk at all times rather than anything approaching quick, but at least there’s strong mid-range punch and a decent top-end to help you make the most of what little you’ve got. It’s more enjoyable than the diesels by a considerable margin, at least, while Kia has installed a slightly contrived sound generator to give the engine note a bit more of an edge.

The torque converter auto isn’t anything like as slick as a VW-Group DSG, but it will respond to the wheel-mounted paddles more quickly than the ‘box in the standard Optima. Kia has engineered in a physical ‘thump’ in the process of speeding up changes, which feels at odds with the rest of the car. We’d prefer either a dual-clutch system or, ideally, a manual gearbox option.

The chassis revisions are enough to give the Optima GT a little of its own character, but don’t expect fireworks. It turns in with a fair amount of enthusiasm and the body does feel well tied down. It may not be the most exciting drive, but it feels natural enough that your confidence increases slightly as you push on. Sport mode ramps up the fake engine noise and gives the steering more weight, but not an artificial amount.

Our test car was fitted with winter tyres, but it meant grip levels in normal conditions were tricky to judge. We’ll be surprised if it clings on as well as a four-wheel drive Superb, however.

What matters most to buyers is that the Optima GT retains enough of the ride comfort, refinement and practicality found in the standard car. Think of it as a decent family estate with a hint of driver appeal rather than a truly sporting wagon and it largely fits the bill. We look forward to see if Kia boosts performance further when it arrives on UK shores at the start of next year, but even so this is not likely to be a volume seller. 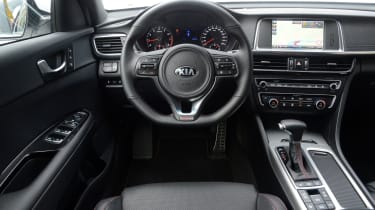 The Optima GT is expected to start from just over £30,000, which is only slightly more than a diesel auto GT-Line model. Kit levels are unconfirmed as yet, however. For comparison, a Skoda Superb 280 estate costs in the region of £35k, while the (arguably less dynamically sorted) Ford Mondeo estate with a 237bhp petrol auto is £27k. The Kia is thirstier than both on paper, however, managing only 34mpg on the combined cycle. Our money would be spent on the Superb, however, thanks to its more impressive engine, four-wheel drive stability and superior practicality.