If the pre-production car is anything to go by the finished product could well be the best Bentley yet.

Fourteen years after its inception, the original Bentley Continental GT has matured into a vastly improved machine compared with those blunt, wallowing coupes of 2003, but the truth is a VW Phaeton’s underpinnings can only be honed to a certain degree. Physics will always tell. So here at last is an all-new Conti GT, and it promises to be a very different beast.

It’s based on the new VW Group MSB platform, i.e. the new Porsche Panamera. However, not only has 200mm been snipped from the big Porsche’s wheelbase, but Bentley engineers were sitting at the table with their colleagues from Stuttgart even at a conceptual stage. The result is that Bentley has gained Porsche technology such as the PDK transmission and the ‘hang-on clutch’ 4WD system.

The new platform is much stiffer, stronger and lighter than its ageing predecessor. In terms of exterior dimensions, not a lot has changed, but the front wheels are pushed significantly further forward, the engine moved rearwards and the car’s beltline is now higher. The result, disguised on these rough development cars, with their bulky cladding mimicking the hunched form of the current car, is a much leaner aesthetic.

> Click here for our review of the all-new Porsche Panamera 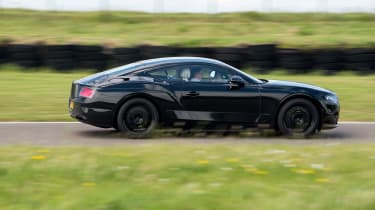 The W12 remains the centrepiece of the Continental GT range. It’s essentially the heavily revised unit introduced in the Bentayga SUV, so bet on around 650bhp with 664lb ft of torque. Gone is the old Torsen centre diff with its fixed 60:40 torque split, replaced by Porsche’s electronically controlled clutch. The new GT is 100 per cent rear-wheel drive almost all of the time, only sending torque to the front when slip is detected.

For a car as multi-faceted and complex in character as a luxury GT, it would be foolhardy to draw any sweeping conclusions from a handful of laps around Anglesey Circuit. However, one thing is obvious: no car wearing a Bentley badge has ever driven like this.

The driving position is much more rakish than before, the steering wheel coming out to meet you, and the view through the letterbox windscreen imposing in a classic, big-grand-touring style. Traditionalists will also be relieved to see a smattering of buttons on the centre console. They’re part of engineering chief Rolf Frech’s belief in keeping things simple. That’s also borne out by his approach to driving modes. Yes, the GT has Comfort, the everyday ‘Bentley’ mode and Sport, plus an ‘Individual’ mode that can be tailored by the driver, but there is just a single setting for steering response. 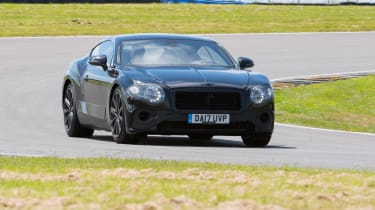 ‘The steering is the main point of contact between the driver and the car,’ says Frech, preaching from a gospel close to our hearts at evo. ‘I don’t like adapting to different steering modes. I wanted a really precise centre-point – not with a heavy offset either side, but nearly linear behaviour.’

It’s the steering I notice first. It’s not especially weighty but it has an accuracy that leads the driver to trust its actions. Bentley’s other secret weapon is the 48-volt active anti-roll system, as seen on the Bentayga. Here, the electro-mechanical roll bars aren’t so much about just stabilising the body as separating that function from the other tasks the springs and pneumatic dampers undertake.

In short, the new GT feels perfectly at home on the circuit, and even after several enthusiastic laps its cast-iron discs give no complaint. This is also the first time that I’ve really sensed the fire in the W12’s aluminium belly. The noise will be toned down for production, but it has a pleasingly gritty howl, sharp throttle response and predictably massive acceleration. 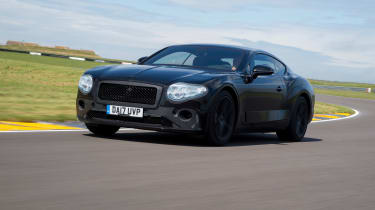 Most notably, the whole car feels vastly more responsive – up on its toes after the blundering mass of the old GT. Before, it was all about wiping off all the speed, trying to get it to turn in and then waiting, and waiting, until it was safe to get on the power. The new car is much defter. It can be turned in on the brakes and steered around on the throttle, the line adjusted with a lift. Hauling hard out of a turn, you sense the torque being redistributed, the GT adopting a neutral attitude, the gear ratios clicking through instantly.

‘We have maintained the luxury but really moved the boundaries on performance with the new car,’ says Frech. We await a road drive of the finished product to fully experience that, but there’s no doubt, based on this first taster, that this is a tremendously exciting new car and potentially a watershed moment for the marque.