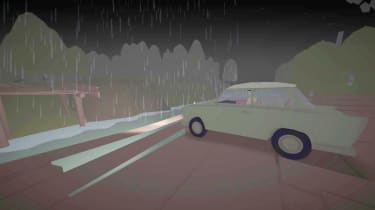 It was as I found myself standing in a general store selling two of my most valuable possessions (a car jack, and the crowbar I’d been using for opening crates dropped by the side of the road) just so I could afford a motel room for the night, that I realised Jalopy isn’t like other driving games I’ve played.

It isn’t about racing. It’s not about driving for fun, even, nor buying a car to tune it up and see how fast it’ll go in a straight line (though you can tune up your car in Jalopy). There are no lap times, there's no car collection element, and the graphics and handling model are rudimentary.

But to my knowledge, it’s the only game that tries to capture the freedom of transport at its most basic: not the act of driving with nowhere to go, but driving because you’ve been granted the rare privilege of being able to do so. 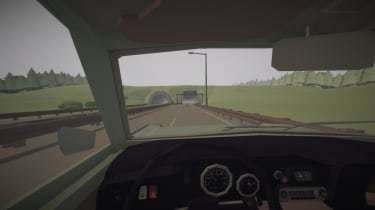 Jalopy is a game set during the final years of the Eastern Bloc, and your steed is the Laika 601 Deluxe - a non-licensed homage to the old two-stroke Trabant 601. The game starts with the car up on bricks, missing its wheels, a door and several vital engine components. This introduction serves as the tutorial to the game, your in-game Uncle explaining some of the mechanics you’ll be using a lot throughout the rest of your time with your jalopy - primarily, tasks required for fixing it.

Once it's in running order you and Uncle jump into the car and set off on your long journey through the Eastern Bloc to Turkey, driving through East Germany, the CSFR, Hungary, Yugoslavia and Bulgaria along the way. During the trip you’ll have to keep your car in working order, finding and selling items in order to buy new parts and repair kits, keeping it topped up with fuel (and oil) and generally making sure your rusty old Laika doesn’t return to the earth. 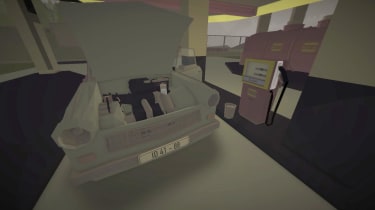 Each night you stop over in a new town, resting at a motel, carrying out any necessary repairs and preparing for the next morning’s border crossing - where you can take the risk of smuggling through goods to possibly sell at a profit in the next country. Without spoiling anything, motel visits are also an opportunity to learn more about Uncle, and about why you’re making all this effort to drive a dilapidated car half way across eastern Europe.

Ah, the driving. This is not a game for speed freaks - it’s more about endurance. You don’t simply leap in and out of the car, but interact with virtually everything - the door handles, the seat, turning the key, releasing the handbrake and using your lights and wipers via the keyboard and mouse combination.

Hills bring the same sense of trepidation they would in an actual Trabant, watching and listening to the speed bleeding away as the gradient changes. Equally, downhill sections are to be enjoyed while they last - or until a corner, which is a test of bravery on your skinny, worn tyres. 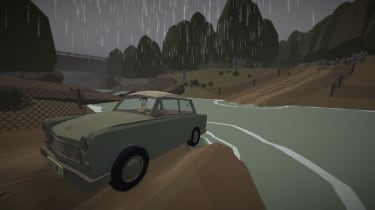 Road conditions affect your progress too, from the rain that causes problems with traction and leaves your car feeling very floaty indeed, to the dirt roads littered with potholes that could burst a tyre at any point. Entertainment comes in the form of jaunty tracks on the radio, conversation with your Uncle and the joy of finding a box of goodies by the side of the road that you can sell in the next shop or petrol station.

Hopefully that’ll be enough to cover your costs for that day, which is easier said than done when you find box after box of low-value sausages and textiles rather than alcohol and tobacco. When my repair and tyre bills stacked up, I found myself with only five credits remaining - hence the need to sell my crowbar and jack just to be able to afford to stay in a motel, to progress to the game’s objective. In contrast, I’ve seen other players amount hundreds of credits thanks to finding crates of valuable wine, enough to make significant performance and longevity upgrades to their little Laikas. 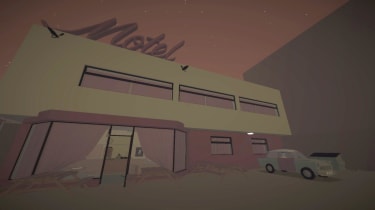 If you’re thinking this all sounds a little… well, unenjoyable, then you’re not that wide of the mark. That’s kind of the point - this is driving for the necessity, under very difficult circumstances in a time and place when freedom of movement wasn’t a basic fact of life like it is today.

In other games the act of “grinding” to generate enough credits or points to progress is tedious and frustrating, but tedium and frustration feel like quite appropriate emotions for a game set behind the Iron Curtain, so it feels odd to criticise Jalopy for replicating them. There’s an element - a bit like choosing to obey traffic regulations in games like Grand Theft Auto - where you realise your own commute is probably more entertaining.

Graphically Jalopy is simple and very gloomy too, with large-poly models aimed more at conveying feeling and atmosphere than realistic fidelity. There’s not a lot of colour, and we’ve had to brighten some of our screenshots just to give you a better idea of what’s going on. But in the game it all seems to work, even if it’ll never find itself next to Forza 7 or Gran Turismo Sport in terms of beauty. 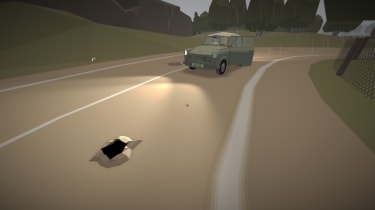 If there’s a genuine criticism of Jalopy’s style, it’s that, while the procedurally-generated landscapes vary from country to country, it can start to feel samey quite quickly. Colour palette and the differing layouts of each town aside there’s not much to mark out Jalopy’s journey as a drive through eastern Europe or any of the individual countries, and even with traffic set to its maximum, you’ll rarely encounter other vehicles to give the trip a sense of life.

The slow progress does pay dividends in terms of longevity. I’ve currently put around four hours into the game and I’d estimate to being around half way through, and at £10.99 on Steam, you’re getting enough “game” for the money. 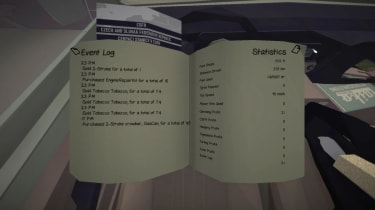 Ultimately, it will only appeal to a certain kind of gamer. You can find wheel-to-wheel racing or explosions and bombast elsewhere. Jalopy’s focus will be better appreciated among those who value the simple structure and easy-going nature of some of the more off-the-wall simulator titles on the mark - think American/Euro Truck Simulator or Farming Simulator.

Me? Luckily, Uncle slipped a few extra notes into my wallet and I was able to buy back my jack and crowbar from the local store. There’s a long journey ahead, but perhaps one day I’ll be able to afford that upgraded carburettor I’ve had an eye on...