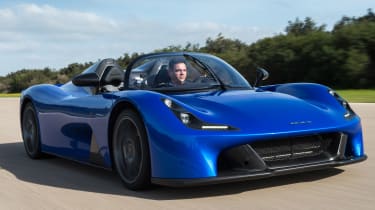 Downforce. It’s all we hear about these days, right? The latest, greatest front-drive hatchback has ‘downforce’. That big 600bhp saloon that launched last week (there’s one every week) has ‘downforce’. I expect there are people scribbling press releases about a new 700bhp SUV (there’s one of those every other week) and they’re writing ‘downforce’ as you read this.

Of course, for the most part, all these aerodynamic claims are slightly absurd. Nobody really needs their hot hatch pressed into the ground by huge wings. And in a world of ever-spiralling power outputs and startling improvements in tyre technology, you could argue that aerodynamic grip is only adding to the problem of performance cars stepping further and further beyond what’s useable on the road.

> Click here for our review of the Caterham 310R

Bloody hell this is good fun, though. Nardò might be most famous for its 7.8-mile high-speed bowl, but the 3.9-mile handling track within it is simply fabulous: fast and flowing, littered with blind crests and fifth-gear corners to take your breath away. Turn One is a long left-hander that disappears out of sight behind trees, and you approach it in the Dallara Stradale in sixth gear at over 140mph. Then you simply turn. No lifting. No braking. Just turn. Trust the downforce. I feel almost guilty for the sheer joy that comes from doing this, for daring to engage with this dark, mysterious force. 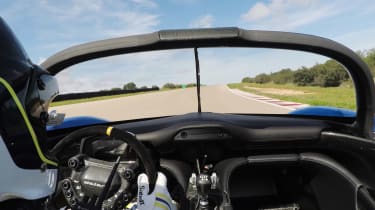 Perhaps I shouldn’t. If anyone should put aerodynamic ingenuity at the centre of its car’s concept, it’s Dallara. A company with a motorsport heritage of astounding breadth and success. It’s no wonder, then, that the Stradale has extraordinary aerodynamic efficiency and utilises all of Dallara’s carbonfibre expertise to create a lightweight, purist driver’s car of ruthless focus. In simple terms, the Stradale is a compact, mid-engined sports car with a focus on track driving. It’s powered by a 2.3-litre turbocharged four-cylinder Ford-sourced engine and produces 394bhp and 369lb ft of torque. It weighs 855kg (dry) in its lightest form and produces over 820kg of downforce at its 174mph top speed if you go for the big rear wing.

The cost? Assuming you want a windscreen, full aero set-up, adjustable ride-height suspension (the lower track setting activates at the push of a button), sticky tyres and race exhaust system, reckon on around £200k. The base car is 155k euros (c£135k) plus taxes. Just 600  will be built, and this will probably be the only Dallara road car ever produced.

Of course, Dallara has a pedigree away from the racetrack, too. In fact it’s Giampaolo Dallara’s incredible personal story as much as this car’s dynamics that is likely to form a huge part of the appeal for any potential customer.

So what about the Stradale? Well, let’s start on the road in the tamest spec, aerodynamically speaking. This car has no wing and the front diffuser is stalled to ensure aero balance. We have a windscreen, manual gearbox, two seats and not much else. You step over the bodywork and place your right foot in a cut-out in the seat cushion (helpfully marked ‘step here’), swing your left leg over, shuffle down into the seat and thread your legs down the narrow footwell.

The seat and steering wheel are fixed, but the pedal box slides in and out and it’s easy enough to get a comfortable position. You feel a little high considering the slight build of the car (there is a slimmer seat padding option that’s intended for bigger frames, but it’s actually the better option for anyone taller than Danny DeVito or Chris Harris), and the steering wheel is pulled tight into your chest. The general aura is a cut above that of many smaller track specials we’ve tried, as you’d expect for the money, and the small, button-laden steering wheel feels fantastic. The only let-down is the barely disguised Ford gearknob. Come on, Dallara, you build beautiful carbonfibre things for Bugatti… a tactile, intricately wrought hoop should be the work of a moment!

It takes just a few yards to know that, in contrast, the driving experience and dynamics are compromise-free. The Stradale’s set-up is the work of ex-racer Marco Apicella and supercar test-driving guru Loris Bicocchi. Their passion, precision and expertise is evident in the polished, sophisticated way this car flows down a road. On the optional 18-inch front and 19-inch rear wheels (17s front with 18s rear is the standard spec) the ride is pretty jagged at very low speeds, but once above 30mph the Stradale lives up to its name, effortlessly tracing the surface and dealing decisively with bigger lumps and bumps. There’s zero pitch and the front and rear feel perfectly tied together. 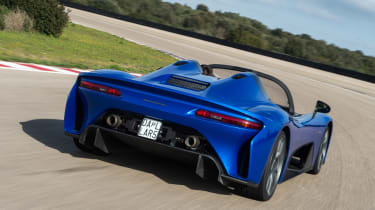 The steering isn’t electrically assisted. In fact, it’s not assisted at all. Now, that on its own doesn’t guarantee a great set-up. Think only of the Dallara-produced 4C for evidence of that. However, in this instance the rack is clean and has excellent feel but without any nasty kickback. It’s not quite Elise perfection, but it’s close enough. The only surprise is that the rack feels quite relaxed in its gearing. Bicocchi loves linear steering with no ‘edges’, and in time you appreciate why, but initially you tend to expect a faster, ‘pointier’ feel.

There’s no question that dynamically the Stradale is a class act: it’s unerringly composed, super-precise, and you can feel the rigidity of the chassis and the benefits of the flyweight philosophy. Body control is simply fantastic. The engine? Despite a Focus RS turbocharger, intake and exhaust, and all the electronic manipulation Bosch can throw at it, the humble four-cylinder remains a power unit rather than an object of real joy. Throttle response is the best I’ve experienced with this engine and it feels every one of its 394bhp and more – this car is seriously fast – but it is a support act to the main event.

Waiting for us at Nardò is the Stradale in its most aggressive form: rear wing (9500 euros), Trofeo R tyres (1900 euros), paddleshift ’box (12,900 euros) and adjustable suspension (3800 euros). Apicella leads and  we’re soon circulating at a decent pace. That first turn, the flat-in-sixth special, takes some building up to, but there are plenty more. It’s all high-speed, terrifying stuff. 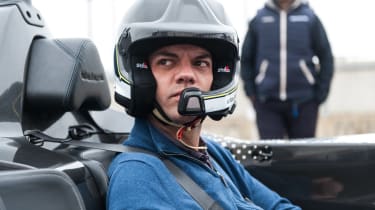 As on the road the brake pedal is awkward to modulate, with a long initial dead travel followed by an abrupt, grabby action. The Stradale has ABS to cover any botched inputs but, nevertheless, it needs some work. Meanwhile, the paddleshift is fast and smooth as these things go (Dallara is still working on the final software and agrees it needs to be faster and sweeter).

Gripes aside, the Stradale feels utterly at home on the, er, pista. Unlike those hot hatches, saloons or SUVs I mentioned, the downforce is real. You feel the car entering a whole new phase as speeds rise, with steering effort and response ramping up. Through long corners it takes some muscle. But while the car asks for you to be assertive, it also looks after you with a high-speed security that is genuinely spooky. It’s just lovely and neutral, the front locked down and the rear pretty much living with the turn-in speed. Occasionally it feels like you’re going to get some turn-in oversteer, but on our handful of laps we never found the commitment to truly unsettle the car.

If anything, this is the Stradale’s problem. It’s so composed and carries so much speed that finding the limit and then driving near or over it isn’t easy. Compared with something like a Radical RXC Spyder the car seems to be always within itself. Or rather, always operating at a level slightly beyond your capacity to reach out and touch. Even so, there’s plenty to enjoy. The performance is startling, the cornering ability close to unfathomable on the track, but somehow in low-downforce configuration it feels supple and quite playful on the road. Bundle all of that stuff up in the legend of Giampaolo Dallara and the knowledge that this is the realisation of his dream car and you have a pretty intoxicating cocktail.