New Audi e-tron review – heavyweight electric SUV is fast, but not much fun

It’s smooth and refined, but e-tron is very heavy and can’t match a Jaguar i-Pace for entertainment 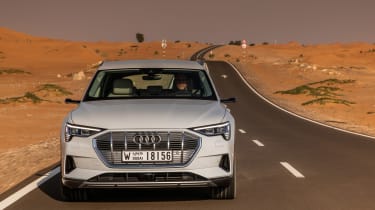 The Audi e-tron represents the German brand’s first tentative steps into the fully electric car market. Predictably given the current climate it’s an SUV, the firm hoping to cash in on the continuing clamour for off roaders and the increasing demand for zero emissions models. Even so, it doesn’t fit into any pre-existing class, falling between the Q5 and Q7 in terms of its exterior dimensions and undercutting both the Jaguar i-Pace and Tesla Model X on price.

However, where the e-tron diverges from the current electric car trend is in its styling, which is deliberately conservative. Whereas rivals have chosen to use the unique packaging opportunities afforded by electric architecture to create bold new looks, the e-tron could be easily confused for one if its internal combustion SUVs. Only the subtle e-tron badges, carefully faired in front grille and orange highlights (such as the brake calipers) that are intended to draw parallels with insulation used on the high voltage wiring under the bonnet give the game away. Oh, and of course there’s the two flaps in either front wing that both open to reveal a charging point – one each side for easy access regardless of which side you park against the kerb.

It’s a similar story inside, where you’ll find a layout that’s pure premium SUV. In fact, the dash layout looks very similar to the latest A7, complete with its TFT dials and vast touchscreen in the centre console. Again, it’s the details that betray its battery-powered heart, with the instruments featuring an electrical range display and a power gauge. On the plus side, it’s beautifully finished and reasonably practical too, with room for five at a push and a decent boot. 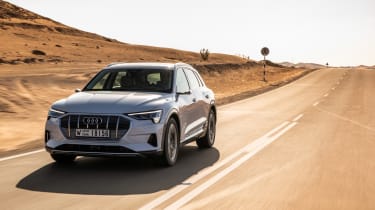 Although marketed as a quattro there’s no physical link between all the wheels, with each axle getting its own motor. At the rear is 188bhp unit and at the front is a 168bhp version and there’s a special performance boost function that adds the extra to deliver a combined 402bhp. In normal driving the rear wheels do most of the work, with the front joining in when maximum acceleration is needed or when ‘off-road’ mode is engaged. In either scenario the maximum torque split front to rear is 50/50. This latter mode also raises the air suspension (an Audi Q7 set-up at the front and a bespoke independent system at the rear) by 50mm for greater ground clearance, recalibrates the ESP and fires-up the hill decent control.

Sitting low in the chassis between the front and rear axles for a low centre of gravity is the battery pack. Featuring 36 cells and a 95kW capacity it’s one of the first that can be charged using a 150kW fast charger, meaning a theoretical 80 per cent of full charge after just 30 minutes plugged into the wall. Of course, it takes considerably longer with a domestic supply (think eight to ten hours), but installing a wall box should cut this time by half.

With a full charge the Audi is claimed to run 248 miles under the latest and stricter WLTP rules, with up to a third of this figure made up with recuperated energy. Engineers claim that in normal driving almost 90 per cent of the e-tron’s braking effort is generated by the electronic powerplant rather than the traditional friction brakes that are used only when slowing quickly from big speeds.

Aerodynamics play a big part in the efficiency drive, with the e-tron recording a drag coefficient of just 0.28, which is impressive for a bluff-fronted SUV. Yet opt for the new virtual door mirrors and this drops to 0.27. Featuring a high definition rear-facing camera that’s housed in a sleek pod in place of the usual chunky mirror, this set-up beams images to a small screen set into the top front corner of each door (essentially where a hi-fi tweeter would normally go). The quality is good, but it’s mounted at an awkward angle and you have to lower your eyes too much to get a decent look at the image.

With 400bhp and an instant 490lb ft on tap it’s no surprise to find the e-tron is a lively performer, even taking into account its thoroughly obese 2498kg kerb weight. Audi claims just 5.7sec for the 0-62mph sprint, and on the road it feels every bit as fast as those numbers suggest. Initial throttle response can be a little sluggish off the line, but switching to Dynamic (there are also Eco, Comfort, Allroad, Offroad and Individual modes) sharpens the throttle nicely.

Once rolling there’s an instant surge of acceleration, although it starts to tail off at around 90mph or so. Top speed is limited to 124mph – engineers claim the car could go much faster, but the drain on the battery would quickly diminish the range. Speaking of which, at a fast motorway cruise (80-90mph) your 248 miles range quickly drops. Better results are achieved on give and take secondaries where the strong regenerative braking effect allows you to harness energy, even boosting the distance to empty on downhill stretches. 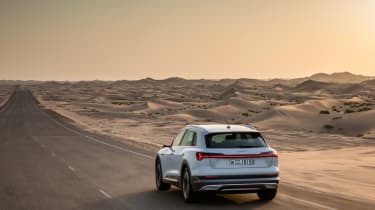 You notice the smoothness and silence of the electric powertrain first, with only the faint whine of the regenerative braking doing its thing as you coast on a closed throttle. But apart from this typical electric car refinement and that seamless surge of acceleration it’s fairly ‘normal’ to drive. It certainly can’t beat the Jaguar i-Pace for agility, despite having its batteries set low in the chassis. For starters it’s taller than the British machine, plus even in its Dynamic setting the Audi’s air suspension struggles to contain roll.

The steering is light and mute in all settings, while understeer quickly builds if you try and attack corners with any enthusiasm. Lifting the throttle allows you to tighten your line, but the transition back to neutrality is rather slow. Get really aggressive on entry and you can feel the rear start to rotate, but by this time the tyres are howling such an attention-grabbing protest that you’ll feel compelled to back off. Ultimately, it doesn’t matter how low you place the masses, if a car weighs as much as the e-tron then inspiring driving dynamics are always going to be hard to come by. 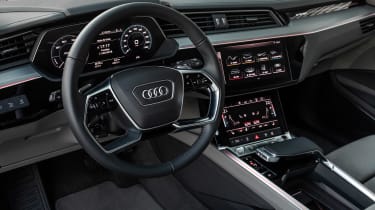 Yet while the soft and lifeless e-tron isn’t fun, it is quiet and comfortable. Even on its vast 21-inch rims the ride is supple and composed, with only sharper imperfections sending tiny, shuddering shockwaves through the cabin as the suspension struggles to contain the movement of those massive wheels. The e-tron even acquits itself reasonably well off-road – although our rocky and sandy test route was only a mild test. There are no locking differentials, but traction is reasonably good, while the 50mm increase in ride height delivers decent approach, departure and breakover angles. It won’t keep up with a Land Rover, but there’s more ability here than, say, a Tesla Model X.

You’ll pay £71,490 for an entry-level e-tron, although this amount drops by £3500 if you take into account the Government’s plug-in grant. At the other end of the scale there’s the limited run £82,240 Launch Edition, which comes with all the equipment under the sun, and more.

Starting at £63,495 is the Jaguar i-Pace, which can’t match the Audi for practicality or space, but is far sharper to drive. Prices rise to £74,445 for the flagship HSE model.

The Tesla Model X gets distinctive gullwing rear doors and a seven-seat option, but with prices starting at £79,150 it’s a more expensive proposition than either of its smaller rivals.

If a pure electric proposition doesn’t quite fit into your lifestyle but you like the idea of some zero emissions running, then the Porsche Cayenne E-hybrid is worth consideration. It gives up to 27 miles of electric range, but with the back-up of a 3-litre V6 petrol. It also rivals the i-Pace as an SUV that’s decent to drive. At £68,423 it undercuts the Audi too.