Brabham BT62 review – how is the million-pound track weapon shaping up? 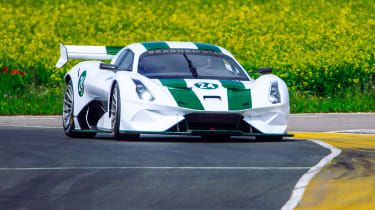 It’s almost exactly 12 months since Le Mans winner David Brabham revealed the BT62 to the world, and since then Brabham Automotive has been hard at work to turn it into a production reality. This development example is representative of the track-only versions in terms of its mechanical make-up and much of the design, but the final polish will come later. More importantly, the development programme gave us the opportunity to try the BT62 around a blissfully dry Blyton Park, ahead of a more extended drive of the finished car later in the summer.

Brabham is understandably coy about the basis of the BT62’s 5.4-litre V8, but it is built to the firm’s specification and is bristling with motorsport-specification details. Eight individual throttle bodies feed the dry-sumped, quad-cam unit which dishes out a claimed 700bhp at 7400rpm and 492lb ft at 6200rpm, delivered to the rear wheels via a Holinger six-speed transmission with pneumatic actuation.

Zero to 60mph times are less of a concern for a car such as this and there are currently no official figures, but with a dry weight of 972kg it should be capable of performing the sprint comfortably in three seconds or less. 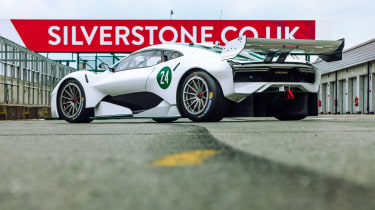 What sets the BT62 apart from rivals such as the McLaren Senna is that it takes a more traditional motorsport route in its make-up, with a tubular chassis and roll-cage clothed in carbonfibre panels inside and out rather than a full carbon core. There are more motorsport touches, including a 125-litre fuel cell, air jacks, full data logging and, most importantly, carbon brakes. The scope for tweaking the BT62 for the conditions and your preferences is also vast; the double wishbone and pushrod suspension has adjustable Öhlins dampers and anti-roll bars, while the bespoke carbon steering wheel allows you to adjust the mapping for the throttle, ABS and traction control all on the fly.

It’s hard not to be a little intimidated when climbing into the driver’s seat, particularly when five minutes before David Brabham has provided a dozen demo laps at truly dizzying speeds. Anyone familiar with the cabin of a GT-spec racer will feel at home, but the key controls are spread between the wheel and a high-mounted pod and starting it is almost unceremonious – at least until the 5.4-litre V8 fires. It idles comfortably, but the noise – still currently being piped through a track-specification exhaust system – is loud and spectacular but deliciously authentic, even through a crash helmet.

The adjustable pedal box makes finding a good driving position easy, and the clutch is manageable rather than heavy. Pulling away requires a few more revs than with a conventional car but it is considerably easier than a full-on racer, so embarrassing stalls should be a rare occurrence. The first few laps are with the throttle switched down to just 40 per cent to get a feel for the car and start to warm the tyres and brakes. A temperature of 300deg C is required before the latter begin to work properly, but even when showing half that it’s clear there is no comparison with road car equivalents.

Even during moderate-speed circulation, the BT62 is remarkably benign. All the visual and audible clues tell you that this is a racing car; the view out, the digital displays, the yoke-like steering wheel and the unfiltered mechanical symphony going on behind you. But the physical inputs required from you are little more strenuous than in a regular car. 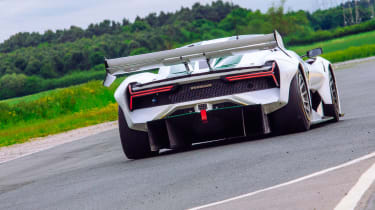 Both the ABS and traction control system are turned up for safety’s sake, despite a hot track and slick tyres, but once the throttle is turned up to the day’s maximum of 80 per cent it still feels necessary to draw a deep breath before committing to full chat and maximum revs. It is savagely fast yet perfectly linear with it, the next gear firing in instantaneously and allowing you to metre out every horsepower precisely, all with that full-band soundtrack; it sounds incredible from half a mile away, so its effects are magnified when you are in the box seat and controlling the noise.

Spectacular the performance might be, but it is the way the BT62 behaves up to and through Blyton’s relentless series of bends that really shows its brilliance. Even after several laps it always seems to have more braking power in reserve, the ABS never getting close to cutting in and always with space to play with. A full-on mashing of the pedal delivers belt-straining levels of retardation, and although they need a little temperature management before and after hot laps, they operate beyond the level of any comparable car.

With 1200kg of downforce at 125mph and slick tyres, the expectation is that the BT62 will be race car-sensitive, gripping and gripping until suddenly letting go with little warning. The truth is that it impresses not just with the levels of outright adhesion, which are stratospheric, but that it guides you and keeps you informed with small slip angles as you nudge at the limits. In slower corners there is the merest degree of understeer if you get a little ambitious, but a lift brings it back with no drama from the rear. Get it right and the precision and balance are intoxicating, allowing you to place it precisely and trust it completely. 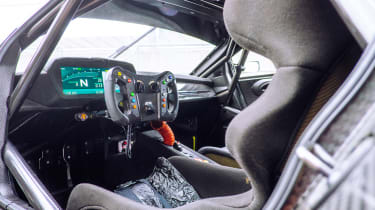 Higher-speed corners are another level altogether. Blyton’s Port Froid right-left is comfortably a fourth gear sequence, but the BT62 is coming into serious levels of downforce and simply accepts all driver inputs without flinching, and is capable of generating enough G-force to leave your neck straining at the increased weight of a crash helmet. That it is capable of all this with such accessibility and user-friendliness is one thing, but still offering spectacular thrills and with plenty left in reserve, is even more remarkable.

With a limited run of vehicles and several significant options to choose from, the final pricing details are yet to be confirmed, but expect to pay £1.2million with taxes but before options. The expected road-legal pack is likely to cost an additional £150,000 too.

The key rivals will be similarly exclusive and expensive – Aston’s £2.2million Vulcan sold out long ago and Ferrari’s FXX-K is even harder to get hold of. McLaren’s forthcoming Senna GT-R will run the BT62 closest with an expected £1.1million price tag, but all 75 examples are already sold.