Wind in your toup�e, thundering 6-litre V8 in your ears 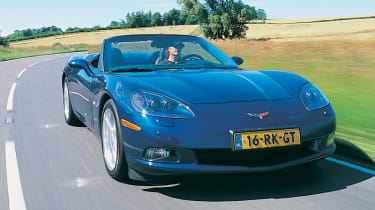 It's one of those curious illusions. The new Corvette Convertible appears to be the size of an SUV but is really of similar dimensions to the latest 911, a car that, while bigger than it should be, is hardly obese. But that's where the likeness ends. The 'LS2' 6-litre V8 residing beneath the long bonnet ensures that from the first twist of the key the Vette's character is notably different from that of the German icon. This engine makes all the right NASCAR-esque noises and rustles up some impressive outputs: 404bhp and 403lb ft. In a car weighing 1517kg, all that power and torque is given the chance to convert into stirring performance. With true muscle-car gusto the Vette will smoke off the line in an eruption of sound and energy, reaching 60mph in little more than 4.0sec and rumbling on to a top speed of 186mph. What really sticks in your mind is its enthusiasm to keep racking up the numbers beyond 100mph - the speed just keeps building on the fighter-plane-style head-up display in the windscreen. Pity the chassis isn't quite up to the poke. On a bumpy road you get the sensation that the Vette is surfing slightly precariously between crests. There's not the indomitable composure and structural integrity you get from a 911 despite the tremendous dry-road grip the Chevy can muster. Annoying 'reminder' buzzers cause further disgruntlement, as does a security system that requires you to park in reverse or it flattens the battery in less than a day. Still, the Corvette is a characterful cruiser with brutal acceleration. Whether the drop-head is worth a £6K premium over the dynamically superior coupe is down to your fondness for convertibles.