The ideal car for anyone needing seven seats and 237bhp 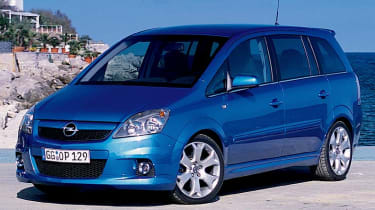 Remember Daddy Cool? Well here's Baddy Cool, a Zafira MPV with even more power than the old GSi version that spawned the annoyingly memorable telly ad. The Zafira VXR ups the pony count to 237bhp, the same as the Astra VXR, on account of it sharing its powerplant with the rabid hatch. Intriguingly, Vauxhall still offers the old 197bhp GSi motor in the Zafira SRi, a model that doesn't shout its potential anything like as loudly as the bodykitted VXR.

The notion of a rabid MPV is slightly absurd, but on the Targa Florio test route(!) the Zafira VXR was surprisingly amusing. That is, once you'd experienced your first burst of lane-changing torque-steer and learned to hang on tight to the chunky steering wheel every time you planted your right foot. Thus enlightened, the pull and tug ceases to be an issue, although enthusiastic exits from tight corners reintroduce a bit of writhe - not to mention tyre smoke - into your life.

Going hard in the Zafira is never less than a mild battle of wills between you and the car, yet there's more than enough performance, grip, agility, stopping power and sheer gritty spirit to make it feel fun rather than futile. The fact that you sit so tall and upright in something that is so clearly not a sports car simply adds to the satisfaction of stacking away winding miles so swiftly.

Despite the IDS2-Plus electronic chassis control, the ride is only so-so, turning to brittle when the going gets tough. But, unlike the Vectra VXR, the Zafira is seldom outwitted by the road surface, even when it's as poor as on the Targa Florio.

Who needs a hyper-MPV? You may not fancy it, but high residuals for the old GSi prove that lots of others think it's an appealing formula. And if you are in the market for such a thing, the VXR really is the daddy.