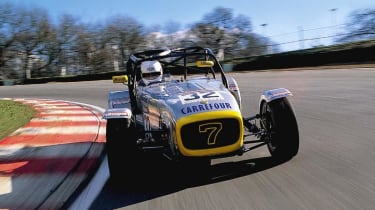 For the last 18 months or so, the Caterham story has been all about the CSR, the wide-bodied Seven with its inboard spring/damper units, aerodynamic tuning and stonking, 260bhp, Cosworth-developed 2.3-litre Ford Duratec engine. Today, however, we're at Brands Hatch to try an 'old school' narrow-chassis R400 racer, but one fitted with a brand new 220bhp 2-litre Duratec, also tuned by Cosworth. Just before Christmas, Caterham announced that for the 2006 season the R400 race-car chassis, until now home to a 200bhp 1.8-litre Rover K-series, could be fitted with this new engine. The C400, as this combination is known, is available as a partial-build complete race-car (£26,995) or as an engine conversion for existing R400s (£10,986, or £8930 if an R400 K-series engine is traded in). Some 34 orders have already been taken, some of which are for road cars. There had been no mention of a road version, but given the thoroughness of Cosworth's work, the new engine was never going to be for racers only. Caterham has since confirmed that a roadgoing C400 will go on sale in August. This second Cosworth engine is the strongest indication yet that the long-serving Rover K-series is on borrowed time with Caterham. Last year the company secured a supply of K-series engines that would see it to the end of 2006, but hopes that this would be continued under MG Rover's new Chinese owners are fading. This is a great shame because, as technical director Jez Coates says, the light and compact K-series is a brilliant little engine, one that could have been designed for the Seven, and it has served them very well since the early '90s. Prime mover behind the push to find a new engine for the R400 was Caterham's motorsport director, Magnus Laird. For various reasons, including the demise of MG Rover, a malaise had descended over the R400 series, and Laird argued that the company had to act to rejuvenate it. He convinced Caterham management that there was a strong case for commissioning a new engine, and, in late September, Cosworth began work on the 2-litre. Compared with the 2.3, the 2-litre Duratec offers the advantage of being 15mm shorter in height, making it an easier fit in the narrow chassis. The recipe for extracting more power is similar: forged pistons and rods, unique cams and stronger valve springs are fitted to enable it to rev higher. Unlike the 2.3, however, the 2-litre is fitted with Cosworth's evolution of the Caterham roller-barrel throttle and its own design of dry sump. Minister Racing, Caterham's official development partner, did the engine mapping, and the upshot is 220bhp at 8000rpm and 165lb ft at 6250rpm, increases of 10 per cent over the R400's K-series. The road car engine will make do without the forged pistons and rods, but it will still make 210bhp. It will also be the first Seven with Caterham's new laser-cut and MIG-welded spaceframe chassis, which will be some 14 per cent stiffer, thanks partly to lessons learned from the CSR chassis. This silver R400, owned by Ben Dezille Butler and run by Minister Racing, has taken up where Caterham's own development car left off. It was used to prove the validity of the conversion kit, which comes complete with every last nut and washer, and is fitted with the development engine, which had already clocked up 1150 trouble-free miles at various UK circuits. The Duratec weighs 18kg more than the K and its exhaust exits on the driver's side, which will mean some corner-weight set-up work, but the C400 is still expected to be a second a lap quicker on longer tracks, half a second per lap on shorter ones like Brands Hatch Indy. It's been a couple of years since I drove an R400, but this C400 sounds and feels quite similar. The Cosworth Duratec has a crisp, urgent bark, revs cleanly and keenly right to the 8200rpm rev limiter, and feels very strong. That R400 was on slicks and this C400 is on treaded Avon CR500s, so it takes a sensitive right foot to manage the torque so that you're not power-sliding excessively out of the corners. Thankfully, the short-travel throttle is very precise and the engine instantly responsive, so you can get exactly the amount of urge you want - as ever, the car feels fastest when it's driven tidily. Well, to me it does. Dezille Butler has it moving around a bit more, yet we both got down to around 51sec laps during the course of racking up another 200 miles. Unfortunately we can't compare lap times with the previous R400 because it hasn't run on CR500s at the Indy circuit. No matter. I reckon the 2-litre Duratec will be a superb road engine, slightly lower-revving (limited to 7800rpm) but just as torquey as the race version. The really good news is that the new 210bhp C400 road car will cost £1500 less than the 200bhp K-powered R400 (an enormous amount of work and expense went into extracting that power from the Rover engine). We look forward to bringing you the first test.