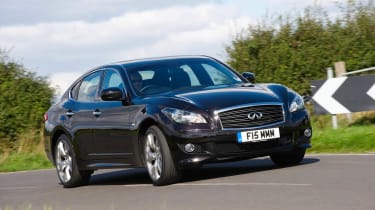 Say what you like about the styling of the M37, newcomer Infiniti’s rival for the 5-series, you can’t say it’s dull. While it’s not quite as gor-blimey striking as the FX, the company’s concept-like luxury off-roader, the M37 is generously curvy, an automotive Nigella Lawson, and makes the German opposition look as sober and predictable as a rack of dark grey business suits.

This is the top model, the M37S Premium. The ‘S’ denotes that it has all the ‘sporty’ bits, such as 20in wheels, sports suspension and four-wheel active steering, plus sports seats, magnesium gearshift paddles and black lacquer interior trim. ‘Premium’ indicates it’s laden with electronic gadgetry. Highlights? Lane Departure Prevention (it gently applies the brakes on one side to nudge you back into lane) and ‘Forest Air’ air conditioning (with forest fragrances. No bears, I’m guessing). Thus loaded, the M37S costs £45K, though the non-Premium ‘S’ is £5K less and the ‘base’ M37, with the same 3.7-litre V6 and seven-speed auto, costs £37,650.

It feels like a big car, whether you’re sat high up at the wheel or lounging in the rear, where there’s generous room, especially headroom. The cockpit has some lovely, tactile features, like the way the satin-finish metal down the sides of the centre console blends into piano black, and there are lots of sweeping curves. The main dials are large and clear but there is an astonishing number of buttons and switches scattered around and not easily navigated. They offer a compelling argument for iDrive or touch-screen-style control systems.

All petrol M37s have Infiniti’s familiar 3696cc V6 and conventional auto. It feels like too big and heavy a car to be sparky with 316bhp, but in fact its 1765kg shifts nicely with the big V6’s 265lb ft shoulder behind it. Most impressive, however, is the polish. The gearlever moves through its gate with a lovely, weighty, well-oiled action and right from cold the drivetrain is silky. The V6 isn’t loud but there appears to be less under-bonnet sound-deadening than in the G37 Coupe.

The ’box makes refined shifts, if not especially fast ones, with a helpful throttle-blip on downshifts in ‘Sport’ mode. There are three other engine/gearbox modes – ‘Snow’, normal and ‘Eco’, the latter asking you to change your driving rather than extracting more efficiency from the car. It shames/encourages you to be light-footed by giving the throttle a leaden feel (which can be disabled) and showing a green ‘eco’ light in the instrument pack when you’re driving very steadily. Hmm.

The steering feels light and sharp at town speeds and gains weight as you pick up the pace, while right away the ride attracts attention to itself, being quite jiggly in town and smoother but still rather sharp at speed. It’s noisy, too, with lots of road roar and texture sensitivity. One reason the steering feels quick is the M37S’s agility-enchancing four-wheel steering, which tweaks the rear suspension into corners. It gives the car the feeling of being better stuck to the road but, rather like Mercedes’ no-roll ABC suspension, it all feels a little artificial because the car doesn’t settle into corners the way you expect. At the exit, even when the rear axle is laying full power on the road in a tight turn, the back end stands up, the rear tyres fizz and you’re away. Clean, yes, but not especially involving, because you don’t feel where the grip is.