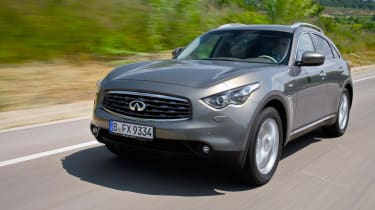 Potent as the Infiniti V6 and V8 petrol engines are, here in the UK the diesel engine is bound to be popular. The oil-burning 3-litre V6 has direct injection and a single, large turbocharger and pushes out 235bhp and 406lb ft of torque, which puts it a little off the pace compared with the 3-litre twin-turbos from BMW and Jaguar.

Approach the idling FX and it sounds like quite a gnarly engine, but from the inside it sounds straight-six classy with a pleasantly gruff, muted note. It delivers, too. There can be an obvious gap between flooring the throttle and decent action, as the gearbox kicks down and the turbo spools up, but once it’s going it shifts the FX’s 2150kg with conviction. The torque is fulsome and the V6 runs out to 5000rpm with enthusiasm; around 8sec to 60mph feels right.

The FX handles tidily for a big, tall, heavy bit of kit, too, despite wheels large enough to fit a steam locomotive. They’re 21-inchers (the lower-spec, non-‘S’ FXs get mere 20s) and, surprisingly, they don’t destroy the ride quality. Sure, the FX can be a little fidgety but only at low speed, where it seems to be short of a ‘comfort’ damper setting, and the steering wheel can buzz with tyre resonance over certain surfaces, but it’s tidy for a two-tonner and there’s none of the steering slack that characterises serious off-roaders.

It’s a good crossover, the diesel FX, if you’re into that kind of thing.