Alpina's take on the BMW M6 is the new 533bhp B6 Bi-Turbo coupe. How does it compare? 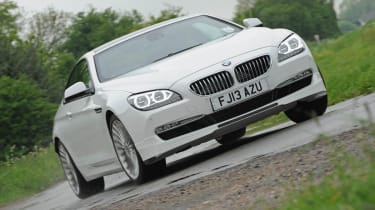 What is it? The Alpina B6 Bi-Turbo, the officially endorsed tuner’s attempt at a BMW M6 rival, with a fettled version of its 4.4-litre V8 and the usual set of subtle visual upgrades the niche brand is famous for.

Technical highlights? The twin-turbo engine gets a bespoke cooling system and high-performance pistons to raise the torque output to 538lb ft from just 2800rpm (though peak power is 19bhp lower than the M6 at 533bhp), sent to the rear wheels via an active limited-slip differential. The Alpina also uses an eight-speed ZF automatic rather than the seven-speed DCT ‘box in the M5 and M6. It has ‘SWITCH-TRONIC’ buttons on the steering wheel rather than paddles and cuts fuel to a single-cylinder for faster upshifts and extra exhaust noise. This is also the first time Alpina has partnered with Akrapovic to develop a full titanium exhaust system – which reduces weight and features active valves to help provide an even more characterful V8 soundtrack.  What’s it like to drive? The standard 6-series makes for a strong dynamic starting point but Alpina has done a thorough job of honing the driving experience into something a lot more cohesive than its rival from the ‘M’ division. The raw materials remain the same and the monstrous 4.4-litre twin-turbo powerplant still totally dominates the driving experience. However thanks to subtle changes to dampers settings, new toe and camber angles and a set of stickier Michelin Pilot Super Sport tyres, the B6 Bi-Turbo feels like less of a blunt instrument than the standard BMW.

Used BMW M6s from under £30,000 Peak power now arrives earlier in the rev range and the extra 36lb ft of torque on offer means the Alpina can still bludgeon a straight road into submission with its ferocious in-gear pace, but the suspension changes add a new layer of finesse, while the titanium exhaust emits a wonderful baritone rumble once the revs climb past 3000rpm. Grip levels are tremendous in the dry but apply enough pressure to the throttle in second and third gear corners and the traction control light flickers away as a constant reminder of the motor’s fierce potency. The eight-speed auto provides quick and seamless shifts and although it lacks the ferocity of the BMW's DCT it does improve the B6’s credentials as a properly sorted grand tourer. Its steering wheel buttons are really tactile and work just as well as paddles, while in auto mode it surfs effortlessly through the gears to keep things in the cabin feeling hushed and refined even at high speeds. Our only key criticism lies with the brakes – the steel discs lack the bite of the optional carbon ceramic items on the M6 – and with such a large amount of weight to control they heat up quite quickly under really heavy use.  How does it compare? Rather well. The B6 is £970 cheaper than the M6 Coupe and is available both as a coupe and a convertible. Without an electronic limiter it’s also much faster (how relevant that is in the UK is questionable) and feels even plusher inside thanks to the bespoke purple dials and high-quality leather. A PDK-equipped Porsche 911 C4S is similar money and sharper to drive – but not quite as capable as a GT car. Anything else I need to know? Despite the towering performance the Alpina is remarkably efficient with a claimed combined economy of over 30mpg and C02 emissions of just 217g/km. It’s also quite a head-turner as those gorgeous 20-inch alloys and subtle carbon front splitter both really suit the big BMW’s long, low shape and add a welcome dose of visual aggression.