The Lexus TMG TS-650 may sound undramatic, but its 200mph performance and Toyota GT86 like drifts are anything but 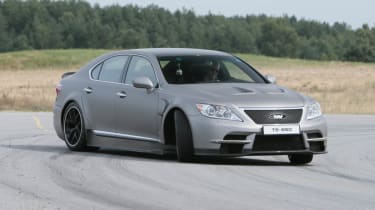 The Lexus TMG TS-650, a rather cold and unglamorous name for a 641bhp, 200mph limo that can tear shreds out of supercars. Based on the Lexus LS460, there’s no price tag or spec list to detail, as this is destined to be a one-off prototype. And if you read on, you’ll realise that’s very sad news indeed…

The TS-650 uses the 2UR-GSE naturally aspirated 5-litre V8 from the Lexus IS-F. To this two Garrett GT2871R turbos are added and the compression ratio dropped from 11.8:1 to 9.6:1. The cylinder heads, pistons, intake manifolds and con rods are new and the valve timing has been adjusted for the blowers. The sump has been redesigned to cope with the higher cornering forces, the oil jets modified and there’s extra cooling for the pistons.

Aero work was undertaken at TMG’s wind tunnels and modifications include a front splitter, side skirts, flat underfloor, a rear diffuser incorporating cooling for the Torsen limited-slip differential and a rear spoiler. The original steel roof has been replaced with a strut-reinforced carbonfibre item that’s slightly more aerodynamic and 7kg lighter, while carbon struts in the engine bay add some stiffness to the body structure.

Fatter arches wrap around the monster 20in alloys shod with Michelin Pilot Super Sport rubber - 10J and 275/35R at the front, 12J and 345/30R at the rear. Modified and lowered suspension features custom-made lightweight uprights to improve high-speed stability. The active dampers are supplied by Sachs and the carbon-ceramic brake discs are from the Lexus LFA supercar, as are the pads.

There can be no argument here – the TS-650, when you put your toe all the way down, is blisteringly, almost surreally, rapid in a straight line. But what is surprising is how benign and relaxed the external visual and aural violence seems from behind the wheel.

The chilled personality is obvious from the start. After a few seconds’ churning, the engine fires up languidly with none of the explosive, blaring histrionics of a modern supercar, and settles to a tickover composed entirely of infra-bass shockwaves. The motor responds lazily to blipping the throttle, the revs rising and falling with a heavy flywheel effect. There appears to be no built-in urgency at all.

The steering is good – well weighted and direct – and the car’s two-tonne mass seems well contained, even with the chassis electronics on the Comfort setting, which allows some modest body roll. Flicking the centre console switch to Sport elicits a noticeable firming of the suspension and, in this development guise at least, defeats the traction control.

Now the tyres start to squeal and the car’s weight enters the equation. And yet the sense of calm composure doesn’t flinch. Braking from around 140mph for the long, sweeping left-hander at the end of the straight, the TS-650 feels massively stable and beautifully balanced on turn in, slicing through the following chicane with a measured precision and persistence of grip that almost beggars belief. Confidence builds rapidly and with it the temptation to feel more and more of the motor’s sledgehammer thrust and to giggle at the upshift exhaust bombs. But however many liberties I take, there seems to be all the time in the world to sort things out, the big car drifting so progressively under power in the slower turns, you’d swear you were in a Toyota GT86.

With no sales planned, comparisons are purely hypothetical sadly. The 577bhp Mercedes S63 AMG, 567bhp BMW M5 Competition Pack and 513bhp Porsche Panamera Turbo would look like its most imposing rivals, but the Lexus feels capable of giving them a bloody nose. And probably a broken jaw, too.

No other performance limo goes, sounds, handles and stops like the TS-650. If it could be produced, even at £150,000, I’m sure it would sell. But don’t hold your breath.