A new face for the Rolls-Royce Ghost, now called the Series II, has made its debut at the Geneva motor show 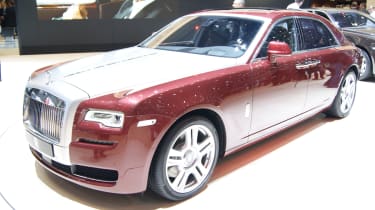 Rolls Royce has revealed a re-designed and updated Ghost to the public at the 2014 Geneva motor show.

Featuring new, sleeker LED daytime-running lights, a tapered ‘wake channel’ on the bonnet, subtly re-sculptured bumpers and new chrome inserts, the Ghost Series II is more substantial facelift than new car. Nevertheless, Rolls believes the Series II will consolidate the car’s ‘position as the most popular car in the €200,000+ class’. Clearly, it’s all about the accessories.

Inside, the Series II has on-board wifi, an updated satnav, and a satellite-aided transmission (SAT) – as seen on the Wraith – which uses GPS signal to determine what cog the automatic eight-speed ‘box should be using in preparation for upcoming corners.

It seems likely the Series II will get the same 6.6-litre V12 engine from the Series I, enough to produce 563bhp and 575lb ft of torque, to no doubt gently-thrust its passengers up to 62 in a license losing 4.7secs.

Rolls humbly states that the Ghost’s target market includes ‘captains of Industry, entrepreneurs and successful business men and women who are the wealth and job creators in our economies.’ But even these lucky-few customers will have to wait until later in the year for the circa £200,000 Ghost Series II to go on sale.