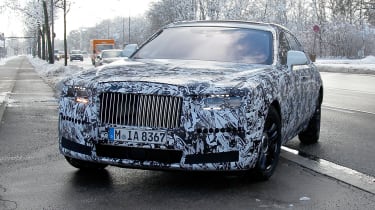 Rolls-Royce is readying the all-new Ghost, on track to be the third all-new model launch by the British manufacturer in recent years. The Ghost will be sold alongside the Phantom and controversial Cullinan SUV, and will be built on the same aluminium-intensive platform as its siblings too, in an attempt to offer similar levels of imperious luxury and refinement in a (slightly) smaller and less expensive saloon package.

Those hoping for a Rolls-Royce of a more subtle nature might be disappointed though, as the Ghost will pick the usual Rolls-Royce design cues, such as the parthenon grille, suicide  doors (or “coach doors” in Rolls’ preferred parlance) and tapered “falling” tail. The new Ghost will be smaller than the rather enormous Phantom mind, making for a more city-friendly way of being chauffeured around.

> Click here for more on the upcoming Bentley Flying Spur

Judging by the prototype vehicle, it does look like the Ghost will pick up a different face to the Phantom and Cullinan, the typical grille offset with some rakish new LED headlights and a lower, slimmer body.

Under the long bonnet we’re expecting the use of the group’s 6.6-litre turbocharged V12 engine, which should give the Ghost plenty of punch to scare the gentry. As in the similarly-motivated BMW M760Li, it’s likely to be connected to a silky eight-speed auto.

The interior is cause for a bigger question mark. We suspect the Ghost will have its own interior design and feel, less opulent than the Phantom’s ‘Gallery’ perhaps, and with a higher focus on technology, given the Phantom’s younger ownership base.

It’s the chassis which will be the biggest change though, as unlike the last model, which shared its basic platform with the BMW 7-series, this new Ghost will be all Rolls-Royce where it matters.

This is an important element, as the Ghost’s most direct rival will likely come in the form of the all-new Bentley Flying Spur we’re expecting to see later this year. That car will share its platform with the Porsche Panamera, and plenty of interior and styling cues from the opulent new Continental GT. Expect to see the new Ghost towards the end of this year, or early next.