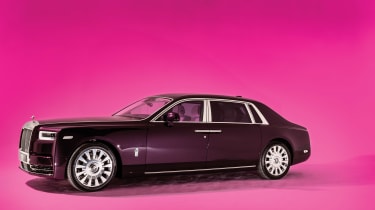 By far the oldest thing about the new, eighth generation, Rolls-Royce Phantom is its name. At 92, it’s the longest lived automotive moniker in the business – truly a witness to history and an enduring statement for those continuing to make it.

Also preserved in aspic, if rather more contentiously, is the hushed yet resolute boast that the name belongs to the best car in the world - the quietest and most comfortable, too. The previous Phantom, launched in 2003 with production only just finished at the beginning of this year, had hardly relinquished its claim on such things but its successor – built around all-new weight saving and modular aluminium matrix architecture that will serve the forthcoming Cullinan SUV as well as all other future Rolls-Royces – is aiming not just to raise the bar, but to put it out of reach.

The Rolls-Royce Phantom 7 had unusual, but highly distinctive, proportions. You could almost call it chunky. The new car is the work of Giles Taylor and his design team and is all about flow. It looks more traditionally balanced front-to-rear with a key line beginning just inboard from the top edge of the grille moving outwards along the body to the tapered rear. The result still packs a visual punch and, if anything, is even more imposing.

> How to off-road a Rolls-Royce Phantom

With elements drawn from Taylor’s 103EX concept and a passing nod to the James Young-era Silver Cloud, there’s plenty to keep students of design hooked in but, undoubtedly, the new car’s most potent aesthetic is the one most people will see first. ‘The reimagining of the Pantheon grille’, as Rolls-Royce has it. 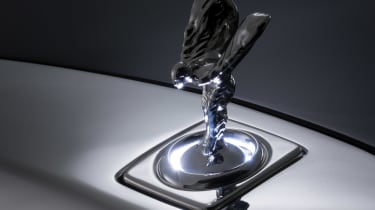 For a start, it’s even loftier, the Spirit of Ecstasy on top flying about an inch higher than before. And, for the first time on a Phantom, the grille is integrated into the surrounding bodywork which looks both cleaner and more modern, especially flanked by the sharper graphics of the ‘laserlight’ headlights which, as an added bonus, can cast their beams 600 metres down the road at night.

The all-aluminium modular matrix architecture has been designed and engineered from the ground up in such a way as to be scalable to the size and weight requirements of different future Rolls-Royce models. The precision body joining process minimises join lines between body panels and the structure is roughly 30 per cent more rigid than the Phantom 7’s spaceframe architecture. This, in conjunction with the air suspension, 21-inch alloy wheels and specially developed, ultra-quiet, Seal Technology Tyres, should lead to and even silkier version of what was already reckoned to be the most comfortable wheeled ride on the planet. 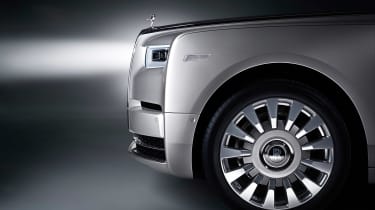 Self-levelling air suspension, which makes millions of calculations every second as it continuously varies the electronically controlled dampers, is a major contributor here and state-of-the-art chassis control systems are major contributors here. In addition, the Flagbearer adds a stereo camera system integrated in the windscreen to see the road ahead, adjusting suspension proactively rather than reactively up to 62mph. But it’s the new double-wishbone front axle and 5-link rear axle are largely responsible for controlling lateral roll and shear forces to enhance agility and stability, as does the addition of four-wheel steering. And thanks to more than 130kg of sound insulation and applied acoustic science, the new Phantom, is around 60 decibels quieter than its predecessor at 62mph. Virtually silent.

Self-closing doors, the largest Starlight Headliner ever seen in a Rolls-Royce, the finest traditional and contemporary materials used in more bespoke and original ways and an interior that generally looks to the future rather than the past were all part of the brief for the new Phantom. When designing the armrests, the J-Class yacht was heavily referenced as a design inspiration. The tension and ‘hull’ of the armrests are directly influenced by these large sailing vessels. 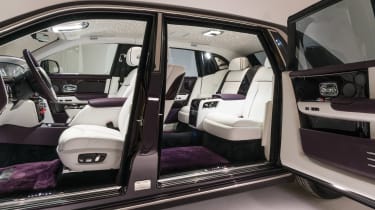 Perhaps more extraordinary still is a concept Rolls-Royce calls ‘The Gallery’. Basically it’s the dashboard reinterpreted as a piece of specially commissioned art. Gone is the cliff face and grouping of large analogue dials, replaced by a seamless swathe of toughened glass that spans the full width of the bulkhead beneath. Here sits a 12.3-inch TFT colour screen with LED back lighting displaying virtual instruments and read-outs, and, of course, there’s also a high-quality bespoke clock.

The remaining area of the dashboard-under-glass – aka The Gallery - can be, well, whatever you want. Just choose your artist.  Art is at the heart of the conception of the New Phantom’s interior,’ comments Taylor. ‘As an interest, we know that a huge number of our clients are patrons of Art and indeed have their own private collections. Art is a binding factor for many of them.’ 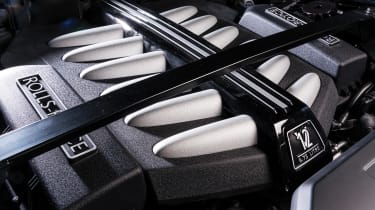 There’s a V12 under the bonnet (what else?) but not the naturally-aspirated one that powered the previous Phantom. It’s been supplanted by a  6.75-litre twin-turbo V12 similar to the N74 motor in the Rolls-Royce Ghost. Its brace of turbochargers contribute to some 664lb ft of torque delivered at just 1700rpm which, teamed with a more than respectable 563bhp, gives a 0-60mph time of, well, for the moment Rolls-Royce isn’t saying but ‘adequate’ should more than cover it. Likewise a top speed electronically limited to 155mph. The addition of Satellite Aided Transmission (SAT), married to a ZF 8-Speed gearbox should also ensure that the Phantom is always in the optimum gear, whatever the road.

Expect the new Phantom, depending on required spec, to cost upwards of £350,000. Buyers will most likely place their orders on the basis that the ultimate Roller has no rivals. But Bentley would no doubt argue that if you’re in the market for a hyper-limo, its £275,000 Mulsanne shouldn’t be overlooked. It does have 752lb ft of torque after all.