New Rolls-Royce Cullinan revealed – aimed over and above Bentley's Bentayga

Rolls-Royce’s first SUV is more than a badge-engineering exercise, Cullinan is the ultimate luxury off-roader 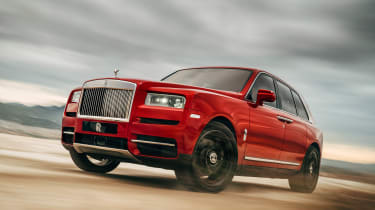 It looks like the SUV trend has finally caught up with the manufacturer that’s sat atop the automotive pyramid for over a century. Even Rolls-Royce, it seems, is unable to overlook the juicy profits associated with the latest automotive trend, and so has not held back with its Rolls-Royce Cullinan.

We’ve known about Rolls-Royce’s intentions of building an SUV for a while now, the Cullinan having been teased in various off-road driving situations it’s unlikely to ever need to face. This is our first look at the final product, and it could only be a Rolls-Royce. At 5341mm long, the Cullinan is 421mm shorter than the Phantom saloon, but is still around 200mm longer than the already vast Bentley Bentayga. It’s also over 150mm wider than the Bentley, too, meaning Cullinan owners who often cross the Hammersmith Bridge in London will likely be disgruntled as it will not physically fit between its width restrictors.

Underpinned by the new all-aluminium space frame chassis as used on the Phantom, Rolls-Royce differs from Bentley by having built its SUV from its own brand-specific architecture. As a result, much of the Cullinan’s mechanical components are shared with the Phantom, including the 6.75-litre twin-turbocharged V12 engine. Connected to the engine is Rolls’s eight-speed automatic gearbox, powering all four wheels. The Cullinan also shares the same outputs with the Phantom, which means it has 563bhp with 627lb ft of torque available at just 1600rpm. These figures do fall short of the Bentley Bentayga W12 by 37bhp and 47lb ft respectively, but like all Rolls-Royces, it’s not so much about the numbers, rather the way the Cullinan produces them, which are key.

Supporting the new body is a similar air-suspension system to that of the Phantom, sporting continually self-adjusting dampers that react to both camera and satellite data to try to recreate the ‘magic carpet’ ride quality famous of Rolls-Royce models. Four-wheel steering has also been adapted for the Cullinan.

A further advantage of Rolls-Royce’s bespoke aluminium platform has been the opportunity for engineers to match the unrivalled refinement levels of the new Phantom. Unlike the Bentayga, which derives its structure from related SUVs like the new Volkswagen Touareg and Audi Q7, Rolls-Royce resisted the temptation to base the Cullinan on a lesser BMW-sourced chassis and went for its own bespoke architecture.

The aesthetic elements that have been a foundation of Rolls-Royce design for over a century are also evident. The bluff, upright front end is dominated by a typical Parthenon grille, topped with the Spirit of Ecstasy, although its scale is a little more subtle in comparison to the Phantom. Flanking the grille are two large LED-filled headlight units, cowled by Rolls’s typical vertical bodylines, which rise up to form the car’s beltline. This beltline then fades into the body, rather than forming a solid shoulder along the Cullinan’s entire length, a styling element first introduced in the latest Phantom.

The Cullinan holds on to the Phantom’s simple, undisrupted side profile, until the rear of the body widens over the rear wheels. Rolls-Royce says that the Cullinan is in fact a three-box design, but with little more than a nib protruding on the tailgate, it’s nothing like Mercedes-Maybach’s bizarre Ultimate Luxury Concept that shocked crowds at the Beijing motor show last month.

Step inside via the Cullinan’s suicide doors and you’ll find an interior built to Rolls-Royce’s usual exceptional standards. The simple, uncluttered interior design is heavily focused on quality, with Rolls-Royce adamant that if it looks like metal, it’ll be made of metal. It doesn’t share the Phantom’s opulent, and hermetically sealed ‘Gallery’, but looks finer and higher spec when compared to rivals like the Bentley Bentayga. A key interior difference between the Cullinan and Phantom that Rolls-Royce has been keen to point out is the use of a smaller, thicker steering wheel, emphasising that this is a car to be driven, rather than driven in. 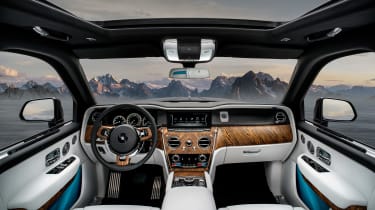 The tailgate (the first time that this terminology has been used in reference to a Rolls-Royce, we should add) is split, as on the Range Rover, and inside it will incorporate what Rolls-Royce is calling its optional ‘lifestyle module’. A case of extreme personalisation, Rolls-Royce will custom-fabricate a box, which plugs into the cargo area, facilitating whatever outdoor activity its relative owner might wish to complete: volcano boarding, perhaps (yes, Rolls-Royce did suggest its customers might want to volcano board). The module will then be designed to contain all the relevant paraphernalia required for the suggested activity.

On sale later this year, the new Cullinan will sit underneath the Phantom in regards to the asking price, but still hover around the £230-300k mark. This puts the Cullinan at a significantly higher price point than the Bentayga, but as an expression of the ultimate luxury SUV, few, if any will likely be able to match it.