Bentley Bentayga W12 review - is this the ultimate luxury SUV?

Bentley's first SUV is deeply impressive, but not a truly thrilling drive 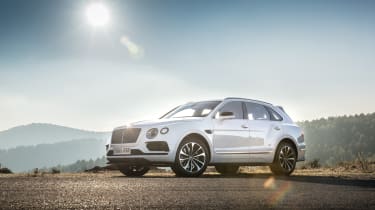 The Bentley Bentayga is an SUV that thinks it’s a racing car. Well, sort of. This is Bentley’s first SUV - a 600bhp, 12-cylinder, twin-turbocharged 4x4 that’s dripping with luxury (if not style) and will undoubtedly polarise opinion.

It’s a model that was previewed with the EXP-9 F show-car in 2012, and makes it to production - it has to be said - with slightly more handsome lines than the concept. And that’s the last we’ll say about the looks…

Bentley has seriously rolled the dice on this one - and held nothing back. Every conceivable engineering, manufacturing and technology avenue has been explored (aside from hybridisation), and the result is a car that is by far the most advanced machine to roll off the Crewe production line.

Power is supplied by a redesigned 6-litre W12 engine with 600bhp and a quite spectacular 663lb ft of torque. This is the only engine available - although smaller twin-turbo V8 is likely to follow. Weight is a whopping 2422kg.

The W12 engine meets phase 2 of Euro 6 emissions, features twin-scroll turbos (for faster response times) plus variable displacement (to cut half the cylinders when under light load). Bury the throttle pedal and it will sprint from 0-60mph in 4.0 seconds flat. Top speed is 187mph.

The now familiar ZF 8-speed automatic gearbox is fitted, with power directed to all four wheels. 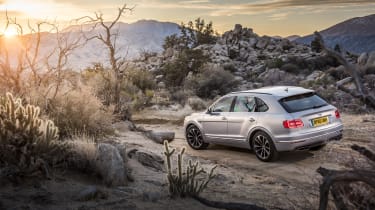 The Bentayga also introduces ‘Bentley Dynamic Ride’ - an active roll system that uses 48V electronics rather than hydraulics to control and manage the system. The advantage of this, according to Bentley, is to significantly improve the time it takes to counteract lateral rolling forces.

Elsewhere, the Bentayga has electric power steering, adaptive radar cruise, night vision, heads-up display, and a quite incredible rear entertainment system that includes a pair of optional 10.2in removable tablets.

Deeply impressive - with a caveat. There’s little doubt Bentley’s chassis engineers have worked wonders controlling the significant forces generated by the Bentayga’s weight. The electric steering is precise and fluid, with solid and consistent weighting and acceptable feel. Dynamic Ride could’ve eradicated feel, but Bentley has engineered in a small amount of roll to help the driver understand the level of available grip.

As you’d expect, acceleration is vivid - with little let-up until you’re well into fourth gear. Braking (steels for now, but ceramics are likely to be an option later) is strong, with good pedal feel. Indeed all the controls are firm and consistent.

The caveat? While the Bentayga does a mighty job of impressing you, it’s difficult to claim that it’s a thrilling drive. You’re seduced by the pace, the stability and the overall indomitable feeling - but you don't get a kick from tackling a particularly challenging piece of road.

OK, so that’s not the point of this car - and in every other area it impales its targets - but for us at least in terms of driving pleasure the Bentayga comes up a little short.

The UK’s particularly rutted and craggy road network was always going to represent a unique challenge for the Bentayga, despite the car being built here and much of its development having taken place on UK roads. Tall, heavy cars need fairly resolute suspension and anti-roll bars in order to control their mass during cornering, which often means ride quality suffers. 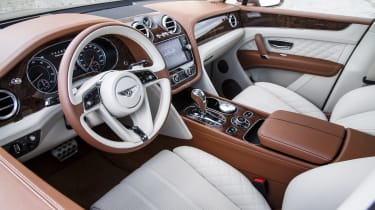 The Bentley actually rides very well in Comfort mode over smaller imperfections in the road surface, but the moment you hit a larger bump or pothole the lack of give in the suspension is very evident – it becomes crashy and unsettled. The sheer frontal area of the car and the size of the door mirrors means there is a fair amount of wind noise, too, all of which means the Bentayga isn’t quite as refined as a Bentley should be. It certainly doesn’t show up a Range Rover for long distance comfort, despite costing as much as twice the price.

The Bentayga’s straight-line performance really is extraordinary, but it isn’t a sporting SUV in the mould of a BMW X5 M or Porsche Cayenne Turbo S – it’s more of a luxury 4x4 than a sports 4x4. That means it lacks the direct, immediate steering response of those cars and the body rolls markedly in cornering, too. That leaves the Bentayga in a sort of dynamic no-man’s land – it neither rides like a Mulsanne nor handles like a Continental GT, which is almost certainly a direct consequence of its tall ride height and 2550kg kerb weight (according to our scales). 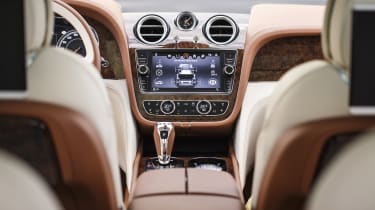 In terms of price, the Bentayga costs £160,200. That’s £50,000 more than a Range Rover V8 Autobiography long-wheelbase, or about the same as a Mercedes Maybach S-class. Land Rover will, in a private moment, scoff at Bentley’s claim that it has invented the ‘luxury SUV’ class with the Bentayga - and point to the 45-year history of Range Rover as proof.

There is no other car with off road capability that’s as fast on road (or as luxurious) as the Bentayga. In that respect - it has no rivals. Dynamically, a Range Rover Sport SVR and the Porsche Cayenne Turbo are a little more visceral, and the Range Rover Autobiography gets close in terms of overall comfort. Nothing wraps it up into a single package like this however.