The twin-turbo petrol V8 gets the best from Bentley’s first SUV, matching the W12’s performance with much of the diesel’s usability 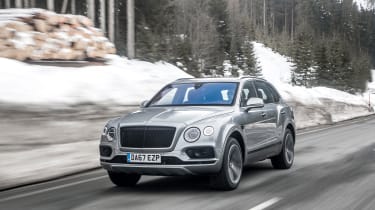 How quickly times change. Less than 12 months ago the idea of launching anything but a diesel engine in your two-tonne-plus SUV would have seen you laughed out of the room in the direction of the asylum. Yes, there are enough of the well-healed who think nothing of ticking the box marked ‘petrol engine and don’t spare the cylinders’, but the majority ordered a diesel and hoped no one would notice. This new turbocharged petrol V8 provides a third option.

Following Porsche’s announcement that it is no longer offering a diesel engine option for the Macan or Panamera, Bentley has launched the fourth model in its Bentayga line-up: the V8. A £136,200, 543bhp model that sits above the V8 diesel and below the W12 models.

Borrowing from within the VW family, Bentley has lifted the 4-litre, twin turbocharged V8 petrol engine that can also be found in the new Cayenne Turbo and reworked it accordingly to ‘deliver the effortless performance characteristics of a Bentley’. It’s connected to an eight-speed ZF automatic gearbox and a permanent four-wheel-drive system.

Peak power is rated at 543bhp delivered at 6,000rpm, with its 568lb ft of peak torque thumping you in the back at 1960rpm, continuing to do so until 4500rpm. Therefore, despite weighing 2388kg it will still reach 60mph from a standstill in 4.4 seconds (4.5 seconds if you prefer 100kph benchmarks) and crack 180mph; that’s just four-tenths and 7mph slower than the W12 Bentayga. The eight-cylinder engine weighs 25kg less than the W12.

With such performance comes great responsibility… for the brakes, which is why this is the first Bentayga to be offered with the company’s gargantuan 440mm (front) and 370mm (rear) carbon-ceramic discs with 10-piston callipers for the front axle, distinguishable by their Tornado red finish.

As with other Bentayga models the company’s 48-volt electrical system is also installed, allowing for the fitment of Bentley’s active-roll-control anti-roll bar hardware. There are also four driving modes available: Comfort, Sport, Bentley (the engineer’s choice) and Custom. If you go for the optional All Terrain Specification you also have the choice of Snow + Grass, Dirt + Gravel, Mud + Trail and Sand Dune settings for the powertrain. 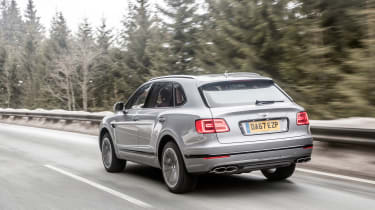 It may have the same number of cylinders as the V8 diesel, but the twin-turbo V8 petrol can’t match the former’s economy. Bentley claims a combined 24.8mpg, equating to a theoretical 460-mile range from the 85-litre fuel tank against the diesel’s 35.3mpg and 660-mile range.

Away from the above technical oily bits the Bentayga’s electronic tech isn’t left wanting. There are 12 ultrasonic sensors and five cameras, and both short and long-range radars to run the show; the show consisting of the following: park assist, adaptive cruise control, an infra-red night vision camera, a head-up display, trailer assist parking aids, and an Optional City Specification that includes five further assistance systems, including a top-down view on the infotainment screen allowing you to monitor every conceivable angle as you drive in a town.

There is also a touch-screen infotainment system, with the standard stereo featuring 10 speakers and six channels, or should you demand to be able to hear the shipping forecast with the clearest clarity there is a 12-speaker, 12-channel system complete with a 700w amplifier. Or you can go all Puff Daddy with the 18-speaker, 18-channel, 1,900w Naim system. 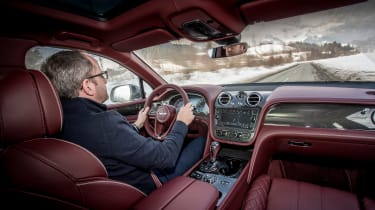 Where the W12-engined Bentayga feels aloof and the V8 diesel sacrifices some of the expected Bentley refinement for a 600+mile range, the V8 petrol brings the very best out of Bentley’s first SUV.

On light loads the twin-turbocharged V8 has the low-end responses that has you questioning the need for the diesel, while through the mid-range and top end it thumps along on a surge of power and torque that would run the W12 so close you’d need a stopwatch to separate the two. Extend the throttle fully and it feels no more than 15 per cent off the pace of the more than 100kg lighter Cayenne Turbo, with which it shares so much of its hardware. The eight-speed ZF is seamless and more than responsive enough and all but renders the column-mounted paddles redundant.

Dynamically it’s further behind the Porsche, not that Bentley claims otherwise, with overly light steering that doesn’t pretend to be telling you anything meaningful. The result is a car that can be hard to place on the road when delving into its performance. However, the air suspension and active roll bars put in a remarkable shift at managing body control. And when you feel the need to hustle more than 2300kg of SUV along a B-road it feels controlled and flows with a reassuring cohesiveness.

Our test car was equipped with the new carbon-ceramic brakes (an option we’d seriously consider) and winter tyres rather than the standard summer Pirellis. The latter resulted in a busier than expected ride on all surfaces and a feeling the car was never really settled. An opportunity to drive it on summer tyres away from the broken surfaces of the Austrian ski resort launch venue should result in an improved ride.

However, one benefit of launching a car in a ski resort is that it provides an opportunity to play around like a kid in a soft play area. So we did. And 2388kg of Bentley SUV can be made to swing between indecently extreme angles with a footful of throttle and much arm twirling. Great fun for us, irrelevant for you. Sorry.

List price for the Bentley Bentayga V8 is £136,200 and deliveries will start in quarter two of 2018. Be careful with the options though: our test car retailed at £212,985, with the ceramic brakes accounting for £11,480 of that eye-watering price, although we’d suggest you take the plunge on them if you intend to explore the V8’s performance. 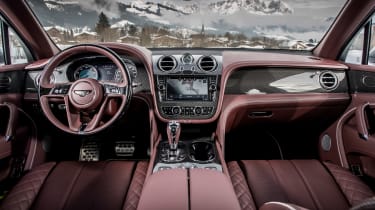 If you’re looking for a rival, look to Range Rover’s 518bhp SV V8 Autobiography. It costs £109,530, feels equally imperial from the behind the wheel and drives as well on the road as the Crewe-assembled machine.

If it was our money we’d go for the Range Rover, but the new petrol-engined Bentley Bentayga V8 is the best Bentley SUV to date.