Bentley’s first diesel will be a guaranteed sales hit, but lacks the polish some might expect 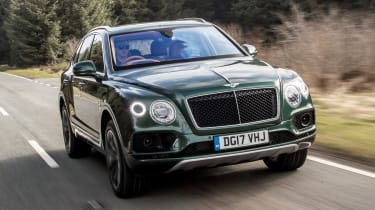 The thought of Bentley building an SUV may have been a step too far for some traditional customers who like their car to be painstakingly constructed by hand in Crewe (even if some of the parts came via Bratislava, Hungary and Germany). The fact that you can now have a diesel engine in said SUV may be a transition too far for those traditionalists. Regardless of this, Bentley has raided the VW Group’s engine shop to produce the Bentayga Diesel, its first diesel car.

It won’t be the only new addition to the Bentayga line, either, with a turbo-charged V8 petrol on its way (courtesy of Porsche’s Panamera) and a plug-in hybrid using the current W12 engine and offering circa 50km of range.

Back to the diesel, the engine is the 4.0-litre triple-charged motor you’ll also find in Audi’s SQ7. With two conventional turbochargers positioned in the engine’s vee, a third is positioned to feed air into the engine at lower engine speeds, and rather than be driven by exhaust gases as per the other two turbos, it is driven by a 7kw electric motor. 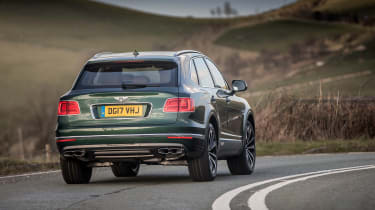 This third turbo’s electric motor is powered by a battery hooked up to the car’s 48-volt electrical system (which is also required to power the car’s active anti-roll bar system) and is designed to improve the engine’s immediate response time. It means that by the time the two other turbos spin into action at 2200rpm, cams have opened in the exhaust valve on each cylinder to maximise the turbo’s performance. As the revs climb above 2700rpm the engine is fed all the air it needs to produce its peak power and torque.

Those peaks are 429bhp at 3750rpm and 664lb ft of torque available from just 1000rpm, the same peak torque as the petrol fuelled W12 engine. 0-62mph takes 4.8-seconds and at 168mph you’ve reached the car’s maximum, making it 0.8-seconds slower to the benchmark sprint time and 19mph slower flat-out. Oh, the shame!

Its engine may not be as blue-blooded as that of the W12, but the Diesel has the same eight-speed automatic gearbox, with the individual gear ratios and final drive left untouched from those found in the W12. There’s a Torsen centre diff to distribute power to both axles with an open differential at the rear.

Despite Bentley being happy to take the SQ7’s engine from Audi, the Crewe firm wasn’t prepared to utilise the SQ7’s four-wheel steering or offer the option of that car’s more dynamic and sport orientated locking rear diff. That being said, there’s a possibility it may appear later in the model’s life once both systems have been further developed. 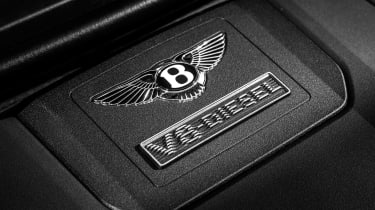 Any new car worth its social media likes wouldn’t be complete with an array of driving modes and the Bentley Bentayga Diesel has more than a handful to select. There are seven (yes, seven) to choose from ranging from Track to Comfort and covering Forest, Snow, Custom and Sport along the way.

Silent. Serene. Effortless. Remote. All the good (and bad) bits of driving a modern Bentley. You’ll need to be an engine genius to detect any level of diesel harshness on start up and when you’re on your way the additional sound deadening that’s been applied to the engine bay and transmission tunnel works wonders to supress any clatter.

Even when you extend the engine revs the motor sounds calm and collected but the performance is less so, as the Bentayga Diesel takes advantage of every drop of torque available to it. More powerful and performance orientated petrol engined SUVs will struggle to keep up with Bentley’s first diesel.

Unless there are some serious radii to contend with, that is. Bentley has given the Diesel its own suspension mapping for the air suspension and dampers resulting in a very flat cornering stance and remarkable body control for one so tall and heavy (2645kg). There’s a little noise from the chassis on poor surfaces and tyre noise can also be an issue on concrete surfaced dual carriageways and motorways when cruising.

It is, however, not what you would call engaging nor thrilling to drive. Then again, name me an SUV that is. Even in its most focused driving mode there’s little to no feedback and that weight soon catches up with you during quick directional changes. There’s plenty of grip and the chassis reacts keenly to inputs but ultimately it’s a Bentley to travel quickly and quietly over long distances in, rather than one to batter the Route Napoleon into submission. 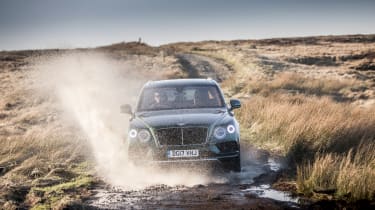 Off road? Yep, it does that. Bentley even let us drive it up a river. With the correct tyres fitted, it will negotiate a ski resort without a second thought, manoeuvre through a gymkhana paddock (no, not the Ken Block kind) and as a device to tow a weekend racer to a European circuit it’s pretty much perfect.

Then again, it does cost from £135,800 before you expose your credit rating to the options list. Not that this will put many off. Bentley forecast to sell 3600 Bentaygas in 2016 but pushed on to produce 5600, and despite the Diesel only being destined for Europe, South Africa and Australia you can expect that figure to climb closer to 7,000 by the time 2017 draws to a close.

Mercedes will sell you a GLS 350d Designo Line for £80,380 but where it dominates for interior space, it’s a far more agricultural device than the Bentley. What of Audi’s SQ7, from where this Bentayga pinches its engine? A snip at £72,895, it’s better to drive and more practical, although with a large degree of premium swagger missing. Of course, the one real rival is the Range Rover, specifically a 4.4SDV8 Autobiography at £101,500.

The Range Rover may not have the same dynamic competences as the Bentley but it does the premium SUV thing better. For all its hand finished interior trim and attention to detail the Bentley doesn’t feel as special as a Range Rover to be in or to drive; the latter not needing to try to do what the former is striving to achieve.