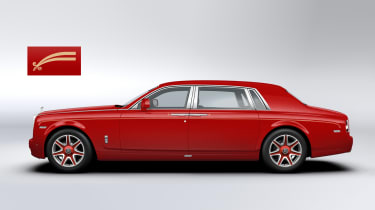 Luxury entrepreneur Stephen Hung has become the owner of the world’s largest fleet of Rolls-Royce Phantoms, after he purchased 30 bespoke extended wheelbase cars for his Louis XIII hotel in Macau. As the Executive Director of the proposed 22-story luxury hotel, 55-year old Hung has been nicknamed ‘The Wizard of Macau.’

Located in a region famous in motorsport for the challenging Macau Grand Prix street race, the Louis XIII hotel’s fleet will also include two of the most expensive Phantoms ever commissioned. Featuring gold-plated trim, the pricey pair are most likely worth over £500,000 each.

The 28 other Phantoms have also been individually customised by the Rolls-Royce Bespoke design team at Goodwood, so they’ll still likely fetch more than £400,000 each. But considering a night at the Louis XIII could cost as much as £80,000 per night, Hung probably isn’t too worried.

Rolls-Royce has also helped to design the parking spaces and driveways of the hotel, and will train chauffeurs in how to handle the ultra-luxury saloons appropriately. We assume that means avoiding the use of all 453bhp of the 6.7-litre V12 while super-wealthy customers stretch their legs in the back…

Rolls-Royce CEO Torsten Mueller-Oetvoes said: ‘The Louis XIII fleet of Phantoms promises to be one of most impressive sights ever seen in Macau. Mr Hung’s commission reaffirms Phantom’s pinnacle position as the motor car of choice for those seeking to experience the finest luxury the world has to offer.’

Totalling over £12 million, the deal was struck on 16 September at a signing ceremony at Rolls-Royce’s Goodwood home. The fleet will arrive at the hotel in time for its grand opening in the first half of 2016.