Does this new Phantom redefine luxury? With laser engraved door shuts and bits of the Rolls-Royce factory within the car, it just might 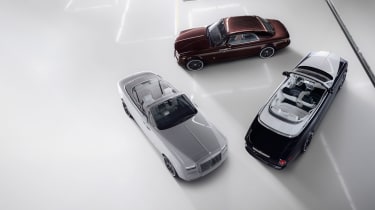 A new, all aluminiuim Phantom is due soon. So as the production of the current Phantom comes to an end, Rolls-Royce has created a special edition, run-out model of the Coupé and the cabriolet version, the Drophead Coupé.

To celebrate the current model, Rolls Royce has created what they call the Zenith Collection of just 50 cars. Each car will have a glass shelf that can be deployed from the cars split tailgate, designed almost exclusively to support your champagne. A fridge that can hold two standard sized champagne bottles complements the shelf. Presumably, in case you’ve spent all of your money on the car itself, Prosecco or Cava would also fit. However, space for only two chilled bottles might not seem enough as there is also eight Rolls-Royce champagne flutes stowed away in the boot too.

Each Zenith edition gets a bespoke hamper that matches the spec of every individual car. To enjoy the contents of your hamper and your champagne in comfort, the rear tailgate is covered in padded leather.

Inside each door, the Zenith models have the maps of significant loactions for the Phantom Coupé laser etched onto the armrest cappings. There’s the Villa D’Este on the shores of Lake Como where the 100EX (that would become the Phantom Drophead Coupé’s) was first shown. And there’s Lake Geneva, as the Phantom Coupé concept, 101EX was revealed at the Geneva Motorshow.

In the dash you will find, what looks like an elaborate ashtray. However what it actually is, is a draw that holds a highly polished case that then holds a piece of the factory that made the Phantoms. The Zenith edition then is like a Russian doll of increasingly superfluous, highly polished addenda.

We expect to see the new Phantom in 2017. As Rolls-Royce try to reduce the age of their average customer, expect the new car to be stuffed to the gunwales with all manner of tech. We’d also expect to see at least a hybrid powertrain, if not a full plug-in electric or hydrogen fuel-cell version.