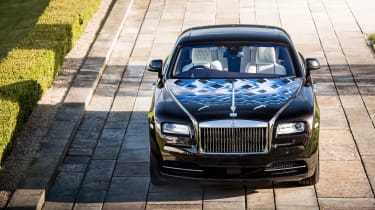 Rolls Royce cars have a deep connection with music - mostly due to the people who've bought them. During the 60s, rock stars flaunted their success with garishly painted Phantoms, while even today the connection remains with a Roller being the ultimate indication that you've 'made it' in the music biz. To continue this connection between music and its cars, Rolls Royce has collaborated with British musicians to create one-off versions of its two-door Wraith.

Rather than allowing the rock stars to drive the cars into swimming pools, which they have a tendency to do, artists including Roger Daltrey, Shirley Bassey, Ray Davies and Ronnie Wood have added their own personal touches to each car by using iconography and lyrics from their illustrious pasts.

Every one of the ‘Inspired by Music’ Wraiths has a the name of name of the musician who the car has been dedicated to engraved onto a plaque in the door openings and onto the base of the Spirit of Ecstasy mascot on the bonnet. The body of each Wraith has been finished in a colour called Lyrical Copper, a metallic brown, and to further celebrate the musicians’ British heritage a stylized Union Jack flag has been painted onto the C-pillars. 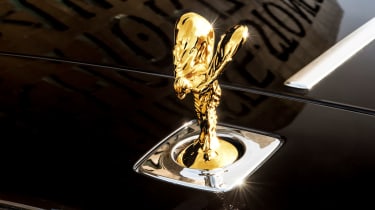 Nine Wraiths in total will form the collection titled ‘Inspired by Music’. The first four cars have been finished and go on display in London this evening.

Each musician then worked with designers to adapt visuals associated with their legacy to create new artwork that was then applied to each Wraith. Sir Ray Davies of The Kinks used lyrics from the band’s songs ‘Shangri-la’ and ‘Drivin’’ to decorate the door-flights. The engraved text used is a digitised version of Davies’ own handwriting.

Further personalised areas include Davies’ signature embroidered onto the headrests, the same process has been used to apply The Kinks’ elaborate logo onto the Wraith’s leather ‘waterfall’ panel between the rear seats. 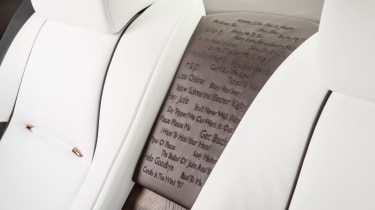 The final touch is on the two umbrellas found in the car’s doors, each has been engraved with lyircs from one of The Kinks’ most famous songs Sunny Afternoon. However, the words have been slightly tweaked to suit the umbrellas’ use and now read ‘When it’s raining on a sunny afternoon, in the summer time.’

A car dedicated to Sir George Martin, who’s often considered the fifth Beatle, has been created by his son, songwriter and producer Giles Martin. The Wraith features the title of each of George Martin’s 30 number one hits embroidered on the panel between the rear seats and a quote from the famous producer on the door flights. The headrests feature his signature, too.

Roger Daltrey, not content with just one Rolls Royce to celebrate his and his band’s legacy, has helped create two cars. The first is dedicated to The Who, with the band’s logo appearing on the dashboard clock and between the rear seats. While the door flights feature lyrics from the band’s 1972 singles, ‘Join Together’ and ‘I Can See for Miles’. 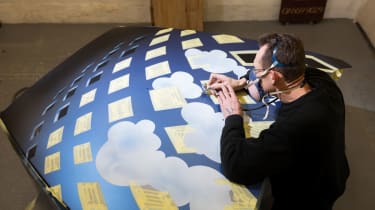 The second car is a tribute to one of The Who’s most popular albums, Tommy. The bonnet of the Wraith has been hand painted with the album’s iconic cover art. Daltrey and the Rolls Royce design team worked with the artist originally responsible for the design of the album’s sleeve, Mike McInnerney, to adapt the image for the bonnet. Other elements of the albums visuals are replicated through out the car, including flying birds on the C-pillars and icons on the headrests. A pinball machine has been embroidered onto the car’s ‘waterfall’ panel to celebrate the album’s most famous song, ‘Pinball Wizzard’.

The collection of ‘Inspired by Music’ Wraiths will expand with collaborations with Dame Shirley Bassey, Francis Rossi from Satus Quo and Ronnie Wood from The Rolling Stones.

The cars will go on sale soon and Rolls Royce expects them to be purchased by both music and car collectors. A proportion of each car’s value will be donated to a charity chosen by the musician associated with the car, including The Teenage Cancer Trust and The Fly Navy Heritage Trust. 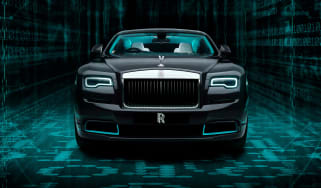 The Rolls-Royce Wraith Kryptos is full of secrets