Despite the company turmoil, it's business as usual for GM's test drivers 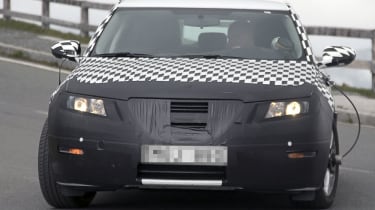 While GM is in turmoil and Saab is moving to Koenigsegg ownership, it's still business as usual for the General Motors’ test drivers as they’re in the final testing stages of the next generation Saab 9-5 in the United States. With its debut near, camouflage is slowly coming off, and these are the best pictures to date of the Saab flagship.

The 9-5 is expected to gain some extra weight, height and length over the current model. The wheelbase is also being increased by 14 cm to make the car a bit larger, although it should fit in nicely within its competition cluster, which consists of cars like the Mercedes-Benz E-Class, Cadillac STS and Volvo S80.

Sources are telling us to expect a variety of powerplants, including a 2.0-litre turbo with 210 horsepower and a higher 2.8-litre V6 for the European market, while the U.S. gets an even larger 3.6-litre V6 – the same one found in the Buick Lacrosse. Diesel is expected, as well as a hybrid model. The public unveiling of the next Saab 9-5 is scheduled for the Frankfurt Motor Show in September.