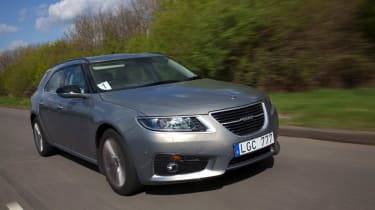 What is it? Saab's fine-looking but dynamically imperfect 9-5 saloon, the first new car since Saab regained its independence from General Motors, is now joined by a SportWagon estate version, and we've driven some pre-production examples. Why now? Because, crucially, all new 9-5s will gain suspension and steering revisions designed to counter strong criticisms of an unacceptably restless, fidgety ride on the UK's peculiar brand of ripply, subsiding road surfaces. Technical highlights The background is this. The 9-5 range felt mainly fine on the international launch in Sweden, but the decision was taken to major on Sport suspension and 18in wheels for the UK press cars. Bad move. I later tried a Comfort version on smaller wheels and it was massively better, although it didn't look as good. Fortunately for Saab UK, most of the cars sold in here so far have been in that same Comfort spec, so the the view out in the field is more favourable than in the motoring press. Now, all 9-5s get revised springs and dampers (with reduced 'stiction') plus new front suspension top mounts, while the HiPer strut front suspension and H-arm rear suspension are now fitted to all 9-5s except the basic 1.6T and lower-power (157bhp) 2.0 TiD versions. This more sophisticated suspension uses a separate, steerable hub like a Renaultsport Mégane's, and comes with DriveSense adaptive dampers (optional on regular MacPherson strut cars). As for the estate car part, the idea is to retain the saloon's refinement and dynamic characteristics. It has a neat 'U-rail' system on the boot floor with extendable bars able to stretch across the arms of the U or take up any angle within it, creating customisable corrals to stop luggage from shifting around. What's it like to drive? All three cars tested were on 18in wheels, presenting the biggest challenge to the suspension's suppleness. First off was the Comfort-spec with MacPhersons and the simpler four-link rear suspension, powered by the 157bhp turbodiesel. The engine is averagely capable, the suspension still too fidgety on these big wheels. The engineers say there's still more calibration to do, which will be done on UK roads and the settings adopted across Europe. Next, a four-wheel drive version with the powerful 187bhp diesel, adaptive dampers, rear H-arms but still front MacPhersons, a combination to be unavailable in the UK. Here the ride was smoother and the steering more progressive, but Comfort mode brought on a shudder over big, sharp-edged bumps taken at low speeds and Sport was too fidgety again. The middle Intelligent setting was the best compromise, but no better than a good passive system could manage. Here was a promising 9-5, however. Finally, a 217bhp petrol turbo with Sport damper settings, HiPer struts/H-arms but passive dampers – and here it all came together. This car had particularly crisp, progressive and natural steering, and the best combination of suppleness and control. Even the big wheels didn't spoil it, although it would probably be better on 17in items if buyers could just be weaned off futile big-wheeled glamour. If this is how 9-5s can be, then it's very good news for Saab because this 9-5's chassis was impressive by any standards. Good lusty engine, too. How does it compare? To drive, the latest 9-5 with its final honing should be as good as anything else in the class, plus it's a particularly handsome machine. The estate car design is nicely executed in a typically Saab style, too. As with the three rival German brands, there's no doubting the brand of the car you're looking at. Anything else I need to know? Saab used to develop its cars on UK roads in the pre-GM era, then it all stopped to save money. It's good that the now-independent company is using the UK again; despite its still-precarious financial state, Saab is doing what it needs to do to create credible cars.