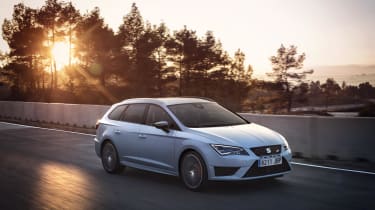 The SEAT Leon ST Cupra 280 has set the fastest Nurburgring lap time for an estate, navigating the Green Hell in a recorded 7min 58.12sec. This not only tops the time sheets for an estate, but also beats the 280 hatch, which recorded a time of 7min 58.44sec in 2014.

SEAT puts the estate’s faster time down to its progressive rear axle and its longer, more aerodynamically-efficient body. We're not so sure - given that the circuit is 13 miles long and the lap times were recorded more than a year apart, yet the difference between hatch and ST is a mere 0.3sec, we’d say the times are well within a standard margin of error. Any difference is as likely down to the driver and conditions as physical differences between the cars. 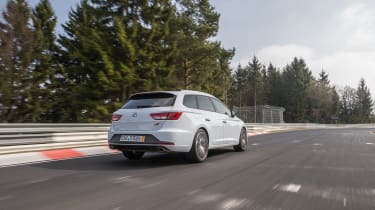 There's certainly not a great deal to separate the hatchback and ST on paper. The Cupra ST 280 features the same 276bhp 2-litre TSI engine and gearbox as the Cupra 280 hatch. Both ‘Ring lap times were set with the DSG gearbox, as opposed to the standard-fit six-speed manual.

Admittedly, the estate car weighs 45kg more than its truncated counterpart. But performance figures are close, with the ST 280 taking a claimed 6sec to sprint from 0-62mph, three-tenths down on the hatch. Top speed for both is 155mph.

The Leon ST Cupra 280’s lap time pushes the previous estate record-holder, the Audi RS4, into second. This means that in the world of estates at least, a front-driven 276bhp four-cylinder SEAT is now faster around the ‘Ring than a four-wheel drive, 444bhp V8 Audi.