Fast estate proves almost just as exciting as the hatch 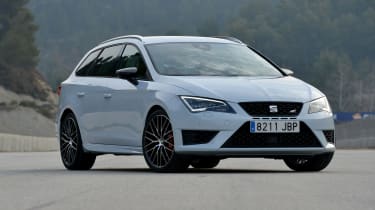 After what feels like eons of being fed the niche-nuzzling doctrine of the crossover and other multiple mash-ups too boring to mention, it turns out what we really, really want are fast estates. Of course, Audi has been banging the drum for as long as anyone can remember – the S4 and RS4 Avants (spurred on by a rivalry with similarly potent load-lugging AMG Mercs) perhaps doing most to fortify the genre.

No-brainer, click-into-place models have subsequently tumbled forth from the group: the decently rapid but oh-so-roomy Skoda Octavia vRS estate, the hotly awaited Golf R with the longer tin roof (you’ll have to wait a little longer), and this, the almost Golf R-spec SEAT Leon ST Cupra 280.

Carried over from the hatch (which we like a lot) is the full-house ‘280’ powertrain. The 2-litre TSI motor develops slightly less power and torque than it does in the Golf R and Audi S3 and, with the estate being 27cm longer than the hatch, there’s an additional 45kg to haul around.

But since the Cupra can throw 276bhp at 6000rpm and 258lb ft from just 1750rpm at the equation, the extra weight doesn’t exact much of a handicap, delaying the trip from rest to 62mph by a meagre three-tenths, at six seconds dead, or 6.1sec if you opt for the six-speed manual gearbox instead of the dual-clutch DSG auto. Top speed remains electronically limited to 155mph.

As with the hatch, the ST sits 25mm lower than the regular Leon S or SE and the software that controls the rear damper settings has been subtly tweaked to accommodate the effects of the extra bodywork and uprated payload. The 235/35-shod 19-inch alloys give the merest suggestion of up-tempo antics, the blood-red brake calipers perhaps let the mask slip a little further and, yes, there are two widely spaced exhaust pipes huddling under the rear bumper. But on the whole, the Leon ST Cupra 280 looks as if it wouldn’t say boo to an MX-5.

On track, the small Japanese roadster would certainly see which way it went, and its eventual return in the rear-view mirror. More impressive than its speed down the straights – it doesn’t hang around – is a braking system that encourages ever later applications without complaint.

There are serious speed-preserving grip levels at all four corners and an electronically controlled diff lock that can send as much as 100 per cent of the torque to the outside wheel via a hydraulic clutch system, thus lettingyou flatten the throttle post apex on a wave of traction but very little in the way of torque steer.

On the road it’s effortlessly rapid, acceptably comfortable, refined on part-throttle (flatten it and you’re treated to a synthetically hyped engine note) and more mildly mannered than its track persona might lead you to believe. In other words, only fierce on demand.

You can think of the SEAT as the car that has to take on Ford’s slightly less powerful, good chunk cheaper, recently facelifted Focus ST estate. In truth, it’s a bit of a track tearaway and absorbing fun, if not quite as amusingly adjustable as the Focus ST estate. It’s a proper estate car too, if not quite as commodious as the forthcoming Golf R. The boot has 587 litres of cargo volume with the rear seats in place, 1470 litres with them folded flat. And all for a premium of just £995 over the five-door hatch.