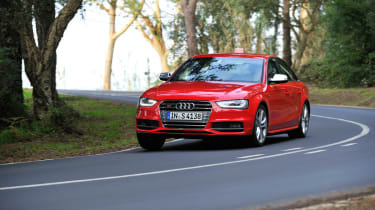 The latest airbrushed, finessed and tech-adjusted A4 with moderately large cojones. Until the new RS4 attempts to revive the glories of its 2006 predecessor next year, a supercharged 3.0-litre TFSI V6 developing 333bhp and 324 lb ft of torque is as hardcore as what Audi claims is the 8th generation A4 gets under the bonnet.

Topping the list is improved efficiency. The latest S4 might not go any harder but it will go for longer before you have to pull in for petrol. With the introduction of start/stop, recuperation, electro-mechanical steering and an extra ‘efficiency’ setting for the Audi drive select system to supplement the existing ‘comfort’, ‘auto’ and ‘dynamic’ modes, combined consumption leaps from a so-so 29.1mpg to an almost saintly 34.9mpg. Tweaks to the S4’s mostly aluminium suspension, with its five-link arrangement at the front and trapezoidal link at the rear, are confined to fine-tuning the dampers and rear control arm mounts for a more comfortable ride.

The A4’s slowly evolving design has resulted  in a slightly more shapely bonnet and nose but with sharply defined details. The headlights and air inlets, in particular, are more angular than before and the lights boast better-looking LED internal structures; the clusters at the rear are prettier, too. Inside, there's a tad more gloss and chrome, a chunky, flat-bottomed steering wheel and a revised multi-media setup, accessed via a simplified version of Audi's MMI interface, plus the now de rigueur stay awake/lane-assist tech. Oh, and a few new colour combinations and inlay trims as well.

Objectively, the S4 is very quick, very grippy, very secure and unerringly on side. The early dartiness of the helm dissolves into a meaty precision above about 40mph that at least boosts confidence, if not anything worthwhile in the way of feel. And the harder you punt the S4 into a bend, the better it seems to like it, especially with the Driver Select control in its Dynamic position which noticeably helps tip the nose towards the apex and even allows a degree or two of power oversteer if you’re really brutal with the throttle on the exit.

But effective as this pace-without-consequence approach is, it’s achieved with a kind of icy detachment that’s more impressive than it is involving. Crushingly accomplished, efficient and reassuring, yes. Agile, light on its feet and biddably adjustable, no.  In a way, the antics of the brawny V6 and double clutch transmission are more engaging. It’s a great engine with a deliciously broad powerband that delivers oodles of linear and, with the almost imperceptible interruptions of the S tronic ‘box, seamless urge, each lightning-quick, red-line upshifts accompanied by that cute exhaust ‘thraarp’ you always get with the VW Group’s performance powertrains.

Paddle-activated downshifts are pitch-perfect and the brakes are pretty mighty, too. For anyone concerned about their blood pressure, this is undoubtedly the car to choose if you want to get from A to B in a serious hurry. For those who like the feel of adrenaline in the morning, an icy cold shower might be a better bet.

Arguably, this is where the S4 really shines. The saloon costs £38,665 (or £39,915 for the slightly sexier Black Edition), the Avant £39,865 (£41,115 for the Black). Given its headline performance stats, tech-laden spec, four wheel drive and pretty much unbeatable build and finish, that has to be tempting in a world where BMW M3 saloons start at £53,220 and Merc’s C63 AMG a still more eye-watering £55,565. Tempting enough to dissuade prospective customers from visiting BMW and Mercedes dealerships? That must me Audi’s gamble.

Is the S4 the best car in the 8th generation A4 range? By far the fastest, maybe. I drove an A4 2.0 TDI back to the airport, four up and with a bootful of camera kit. It was brilliant, possessing a suppleness and lithe agility missing from the S4. It left the stronger impression.