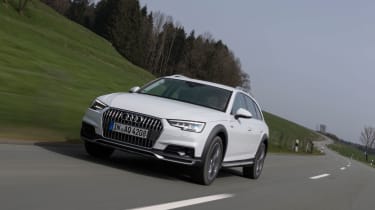 The Audi A4 Allroad is, essentially, a jacked-up Audi A4 Avant Quattro with some rugged looking styling additions. It’s in the same mould as the old Audi Allroads, the Volvo XC70 and the old, but loveable, Subaru Forester.

It’s perfect if you want the space of an estate, some off-road ability but you can’t live with the shame and ignominy of having an SUV.

Its higher ground clearance and black plastic arches might not make it the most extreme off roader, but they do add a purposefulness to the A4’s looks. The Allroad is more understated than a normal A4 Avant, has a much friendlier appearance and somehow isn’t quite as ostentatious. 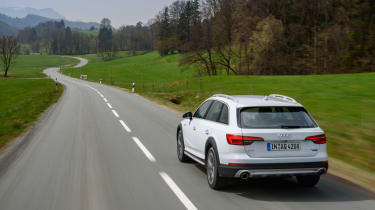 The A4 Allroad is available with 3 different engines. A 2.0ltr diesel with 187bhp, a 2.0ltr petrol with 249bhp and the range topping 3.0ltr V6 diesel with 268bhp. The 2.0ltrs both use Audi’s twin clutch S Tronic automated manual gearbox, however the big diesel uses the 8 speed ZF automatic gearbox that's found in, well, almost everything. Audi calls the ZF it’s Tiptronic gearbox and it’s a very competent automatic in the Allroad. It’s smooth, quick and, thanks to a plethora of ratios, often in the right gear.

The small diesel is rattly at low revs, and unrefined. However, the petrol 2.0ltr TFSI isn’t much nicer. The petrol is a very proficent engine and pulls right to the red line. It doesn’t sound particularly nice though, so it makes you reluctant to really rev it right out.

The 3ltr diesel is the most powerful engine, and the pic of the range. When bumbling around it’s quiet, smooth and ultra refined. It picks up well from low revs with little lag and the 8 speed ‘box easily keeps the engine in its power band. Ask more of the motor, squeeze the throttle and you do start to hear the engine. It emits a deeper, smoother note than the smaller diesel. It’s not an obtrusive sound, it’s very polite; making just enough noise to let you know the engine is there and is more interesting than an inline 4.

The A4 Allroad is the first production car we’ve driven that uses Audi’s quattro with ultra technology. It’s currently only available on the petrol version, but it will be applied to each engine in the future. This is Audi’s more fuel-efficient four-wheel-drive system, which defaults to front-wheel-drive when the traction of all-wheel-drive isn’t required. Read about it in more detail here.

Another piece of technology on the Allroad is its trailer assist function. As I am sure you can spot from the name, this isn’t some new exciting dynamic feature. What it does do is help you reverse a trailer. It’s similar to a self-parking assistance, you choose the angle you’d like to reverse your trailer with the dial on the centre console – the cameras and graphics on the main screen help you decide where you want the trailer to go. The car takes control of the steering, while you just choose the speed and distance that you reverse. You can also change the angle of the trailer mid-manoeuvre by twiddling the dial again. It’s not for the towing expert, but if you’re a novice it may help you avoid humiliation in the paddock as you reverse your trailer into place and not into someone else’s race car. 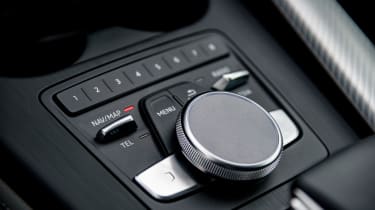 The Allroad is all about how it rides. It’s soft, pillowy and sumptuous. It certainly isn’t like what we’ve become accustomed to from Audi. However, the standard A4 impressed us with it’s ride but the Allroad is even better still.

Most of the roads during our drive were not covered in potholes or made from the rough tarmac we are used to in the UK, but any craggy broken bit of tarmac we could find the Allroad just soaked it up. With the Comfort or Auto mode selected, the ride was composed and calm.

Over crests and larger bumps there was a small feeling of disconnect in regards to what the body was doing, falling out of sync with the road and taking a little while to regain composure. With the Dynamic mode selected, the slightly wayward body control was mostly fixed and yet had very little affect on the supple ride.

The soft ride and seemingly long wheel travel mean the Allroad’s body shell isn’t asked of much. Even the biggest knocks to a wheel didn’t send tremors through the body. This gives the Allroad a really robust feel. It might not have the ‘go anywhere’ feeling a lofty driving position might give you, but it certainly feels like it would cope with most obstacles you’d find on the road. And, quite a few off road too.

The A4 Allroad is 34mm higher than an A4 Avant and, as you’d expect, this results in some noticeable body roll and pitch. The steering doesn’t feel very immediate, as some of the suspension’s slack has to be taken up before the car responds. But, the roll does serve to let you know how hard you’re pushing the Allroad. The body’s movement is the only real feedback you get from the car, the steering doesn’t convey much to your hands and the soft suspension filters out any useful information before it reaches the seat of your pants.

In a bend the Allroad settles onto its rear axle, slightly unloading the front. The test route wasn’t really demanding enough confirm my suspicion that this would result in understeer.

There isn’t much in the way of adjustment either, there is a vast amount of grip and even the most exuberant of inputs are soaked up by the soft suspension and roll. Lifting during a corner moves some weight to the front, equalling the weights across the axles, but that doesn’t affect the Allroads trajectory. The throttle doesn’t change much either, even the abundance of torque from the V6 diesel wasn’t enough to fluster it.

The exaggerated body movements don’t mark the Allroad out as the sharpest tool, but they contrast the very grown-up and sophisticated drive train with some much needed fun. 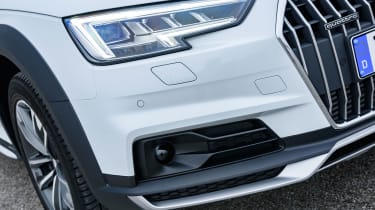 The Audi A4 Allroad starts at £35,560. That makes it the most expensive, jacked-up, for-wheel drive estate with the exception of its big brother, the A6 Allroad. The Skoda Octavia Scout starts at £25,700 and the VW Passat Alltrack £31,185. Neither of those have permanent 4WD like the Allroad though.

The Subaru Outback does have a proper, permanent all wheel drive system and that starts at £27,995. However it’s not as sophisticated as the Audi, the engines aren’t as refined and the interior feels dated and cheap by comparison to the A4’s.

If you consider the A4 Allroad as a small SUV, then the amount of rivals it has increases exponentially. The V6 diesel, the pick of the range starts at £39,180 putting it directly in the line of fire from the Porsche Macan and the new Jaguar F-Pace. These may well look like more conventional SUVs, but they drive better than a lot of estate cars. The A4 Allroad simply isn’t as quick, capable on the road or as fun as the Macan or F-Pace but it does ride better.