The Audi RS4 isn’t as dynamic or exciting as its rivals, but as an everyday performance car it’s a superb package that looks the part 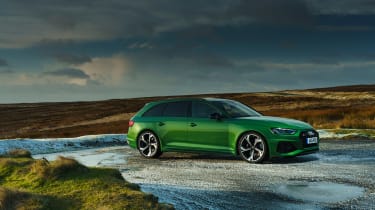 The Audi RS4 has long appealed to a very specific combination of elements with varying degrees of success over its four generations. Through the boosty, fast, but ultimately flawed B6, original V8-powered B7, its unimpressive B8 update and back to boosted V6 power in its latest B9 form, the RS4 has rarely been able to match rivals from BMW and AMG for thrills, but as a package, things have rarely been so clear-cut.

Having just undergone a subtle update in fourth-generation B9 form, the 2020 model hasn’t changed much mechanically, Audi instead focusing on aesthetic updates inside and out. UK specifications have also been streamlined, with three distinct trim levels available.

Of course, the RS4’s chip is the estate body, which AMG aside, is unique in the class, and while the outright performance might be lacking compared to those rivals, its GT credentials, day-to-day ease and superb build quality make the RS4 Avant a deeply attractive package. Especially in green. 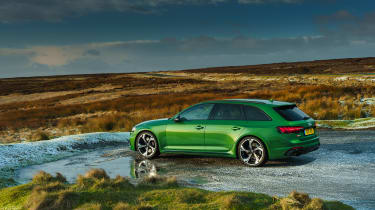 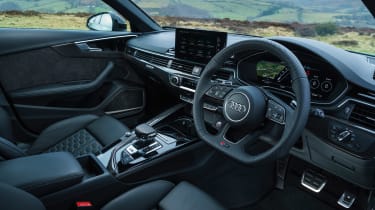 UK-specification RS4s are available in three distinct trim levels: basic, Carbon Sport and Vorsprung. These models collate different equipment combinations into individual models that do away with most single-option choices or option packages – an increasingly common occurrence to more easily comply with the new WLTP regulations. All RS4s are well equipped, with the £64,625 basic model featuring a sports exhaust, sports suspension, Audi’s Sport rear differential and 19-inch wheels. On top of this is a host of convenience features such as Matrix LED headlights, Nappa leather sports seats, full navigation and a virtual cockpit.

Next up at £71,025, Carbon Black models add predominantly aesthetic elements finished in... well you can guess. Carbonfibre is liberally applied to sections within both front and rear bumpers, side skirts and interior trim finishes. The window surrounds, badges, mirror caps and roof rails are themselves finished in black for the full stealth look, set off with a set of black-painted 20-inch wheels.

For the fully loaded Vorsprung model you’ll need to spring a hefty £82,770. Oddly, most of the carbon trim is replaced with gloss black in the Vorsprung, but in its place is a huge spread of extra features, including an RS Sports exhaust, Dynamic Ride Control suspension (we’ll get into detail of this later), dynamic steering and a raised 174mph top speed. It’s also packed with more convenience options such as a panoramic sunroof, B&O sound system, multi-coloured ambient lighting, a head-up display and all the active safety you could ever want (to inevitably switch off). 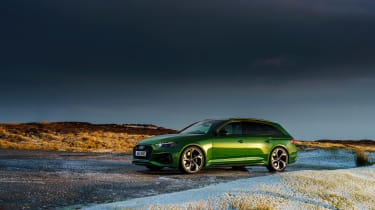 Consider direct rivals and only Mercedes-AMG offers one. The AMG C63 S Estate is a firm favourite of evo’s with its superb V8 engine and lairy rear-wheel-drive antics. The Merc’s £75,458 starting price puts it close to the top of the RS4 range, but its equipment levels are high, matching the RS4 Vorsprung’s £82,000-ish price when equipped to the same level. The Mercedes is by far the more emotional machine, and has considerably more punch with its 59bhp advantage, and a more extroverted demeanor.

Looking away from small estates, things get even more complicated, as the BMW M3 and Alfa Romeo Guilia Quadrifoglio make far more convincing compact executive sports models than both the Merc and the Audi. While neither BMW nor Alfa have a direct family oriented model, both do have SUV alternatives. The BMW X3 M is a total washout, but the Stelvio Quadrifoglio is a great-handling SUV, although not to the point of it being a worthy replacement for the saloon. 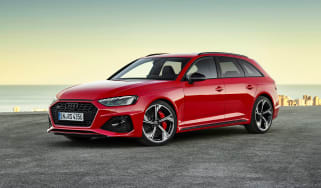 New RS4 picks up fresh styling, but no new engine tech or extra grunt
Skip to HeaderSkip to Content