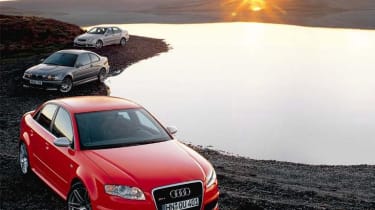 The players may be getting faster, louder and ever more sophisticated, but the script never changes. It goes something like this: a new hot Audi is launched, with class-leading power, huge cross-country pace and the sort of pumped-up, hunkered-down appearance of a heavyweight boxer in a slim-cut Savile Row suit. Meanwhile, the ageing, down-on-power BMW M3 saunters quietly alongside and slowly but surely picks the latest and greatest Audi apart piece by agonising piece, in so doing reaffirming itself as the ultimate all-rounder. To add insult to injury, a few months later a brand new M3 will usually be launched, the segment redefined, and Audi (and the rest) must start the inevitable game of catch-up. As sure as night follows day, the M3 will always be a step ahead of the competition. Untouchable, delectable and deeply desirable. The spec sheet suggests little has changed with the launch of the new Audi RS4. It has 414bhp to the M3's 338bhp. The quattro system is more sophisticated than ever and channels the monster power to four broad 255/35 R19 contact patches. That's the cross-country pace taken care of. Then there's the appearance that's so tough you hardly dare look it straight in the piercing xenon eye. So far, so predictable... But it's in the detail that the RS4 seems to be going seriously off book. That quattro system now has a distinct rear bias (40:60), all the better for balance and interactivity. The 4.2-litre, 48-valve, normally-aspirated V8 engine could have been developed within the walls of BMW's M Division such is its free-revving nature (the rev-limiter halts the madness at 8250rpm) and creamy-smooth yet unmistakably hard-edged voice. This is a new sort of fast Audi, and having tasted its potential in Italy (evo 085) we were desperate to find out if the cycle had finally been broken. Has Audi really torn-up the script and built a car to surpass the mighty, iconic, and - with the introduction of the CS package - better-than-ever M3? The Audi-versus-BMW battle is the main event, no question, but we've also brought along a Mercedes C55 AMG. Often overlooked, the C55 is surprisingly nimble to drive and awesomely fast. Its 5.5-litre V8 thumps out 367bhp and enough torque to take chunks out of freshly-laid tarmac. Think of it as an SLK55 with a fixed roof and four seats. And without the image problem. Make no mistake, the C55 has the potential to give both RS4 and M3 CS a serious run for their money. We're in Wales, where else? Okay, we're not exactly getting in the spirit of Audi's attempt to explore uncharted territories and hit new highs but, a bit like the M3, the roads that criss-cross North Wales are the benchmark against which all others must be judged. When you want definitive answers to the big questions, there's nowhere better to seek them. So, the stage is set: £49,980, 414bhp, 4.2-litre V8 RS4 head-to-head with £43,555, 338bhp, 3.2-litre straight-six M3 CS and £48,790, 367bhp, 5.5-litre V8 Mercedes C55 AMG.