2-litre EA888 four-cylinder is familiar across the VW Group range. Here it makes up to 345bhp with the optional Abt performance package 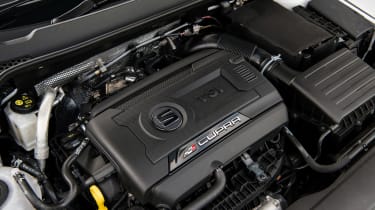 As with pretty much all other manufacturers, changes to the emissions laws in Europe have played havoc with diverse engine ranges in single models, explaining the reduction of possible engine, transmission and drivetrain variations from the first Leon’s many, to its now few. Specific to each body shape, the Leon Cupra hatch is only available with a 2-litre turbocharged four-cylinder petrol engine producing 286bhp between 5400 and 6500rpm, with 280lb ft of torque produced between 1950 and 5300rpm.

The Cupra ST estate gains an extra 10bhp, bringing the total to 296bhp between an even wider 5300-6500rpm, while torque is also up a further 15lb ft to 295lb ft. To put this extra power to the ground, the ST features a haldex-style all-wheel-drive system which improves performance despite its relatively hefty 126kg weight gain. Both Leons feature a seven-speed dual-clutch transmission which is slick and well-programmed. It lacks the bite on hard up-shifts of the best DCTs, but is a result of those pesky new emissions regulations more than anything else. 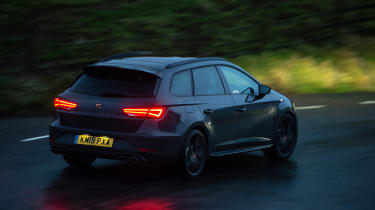 The Cupra R differs on account of its larger Brembo brake calipers (the discs are an identical 340mm), but is available with a dealer-fit Abt performance package that also adds a not insubstantial 49bhp to the 2-litre engine. Designed and engineered by Abt in Germany, the power upgrade is purely by software means, but doesn’t harm the standard model’s drivability or reliability, as exemplified by its coverage under the full manufacturer’s warranty. In fact, rather than merely adding a load more power, the Abt kit also seems to unlock the EA888’s full potential, bolting for the red line with more enthusiasm, while kicking harder in the mid-range.