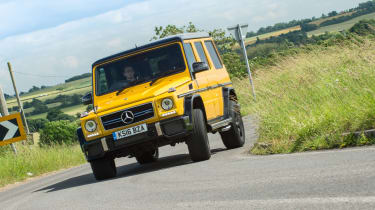 As expensive as the G63 is to run, it pails into insignificance compared to how much it costs to buy. Even though the G63 is a car that was designed in the 1970s, just with every AMG trick and gadget thrown at it, it costs £131,675. Should you want the Colour Edition version, as shown in the pictures, it’ll cost £147,635 for the Solar Beam yellow version or £151,635 for the Galactic Beam one.

But no matter how much the G63 costs, even if it were £10,000, it has no real rivals – the closest in ethos was the Land Rover Defender but that’s no longer in production. When it was, it cost considerably less than the G63 but it couldn’t compete with the Merc’s performance, finish or quality.

To find an equally expensive off-roader as the G63, we’ll have to stay with Land Rover. A new 5-litre, supercharged, V8 Range Rover is in the same price range as a G63, but although the Range Rover is hardly the sharpest tool, it’s head and shoulders above the G63 dynamically. The Range Rover, despite having less power at 542bhp, is fractionally faster from 0-62mph and slightly more economical.

> Click here to read our review of the Range Rover