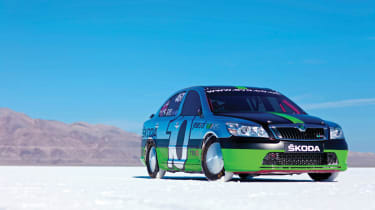 There was a time when Skodas were the butt of every comedian’s jokes. If you write for the Daily Mail that time is still with us, but for the rest of us Skoda has morphed from Eastern Block oddity into a credible and creative European carmaker. That said, it’s still something of a surprise when Skoda UK’s PR manager, Pietro Panarisi, calls to explain his idea to mark the tenth anniversary of Skoda’s vRS performance brand: a one-off Octavia that he hopes will do 200mph at Bonneville Speed Week. Oh, and would I like to be the driver?

And so it begins. The car is built from a regular production car, stripped and rebuilt into a salt-spec vRS saloon by Skoda UK technicians Andy Orme and Ricky Elder. Revo Technik’s Nick Kasberger provides engine tuning know-how and countless other specialists pitch in with help and advice. Mechanically it’s close enough to standard to comply with Bonneville’s production car class known as G/PS. The 2.0-litre TSI engine retains standard block, pistons, valves, cams, crankshaft, head gasket, coil packs and ECU. Factory conrods are replaced by items from Integrated Engineering and the turbo is a monster Garrett GT3562R. The intake, exhaust and cooling systems are also modified and the vRS transmission is swapped for the longer-striding ’box from an Octavia Greenline, Skoda’s economy-biased diesel.

Chassis-wise, the car sits 80mm lower than standard on adjustable dampers, while the regular wheels and tyres are replaced by skinny spacesaver-style rims fitted with bespoke Goodyear Eagle Bonneville tyres. You don’t brake on the salt, so the front discs are removed, but the Simpson parachute mounted on the rear of the car should be more than sufficient to slow the Skoda from what we hope will be the far side of 200mph. 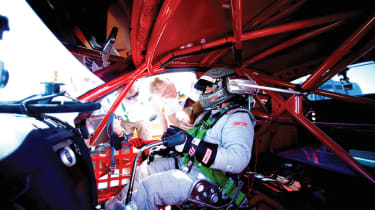 After spending six weeks in a container on a trans-Atlantic voyage, the Bonneville Octavia passes through customs at Long Beach before being hauled to Salt Lake City, where it’s subject to some final fettling and a crucial dyno session to get the engine working in Utah’s thin mountain air. It’s here I meet with the team and see the car for the first time since our shakedown at Bruntingthorpe. It’s the start of what we all hope will be an unforgettable adventure.

Speed Week begins with Tech Inspection, where the car undergoes detailed safety and eligibility checks. Some of the requirements seem arcane compared with European standards, but it’s one of the unspoken truths about Speed Week that the SCTA officials and emergency crews have seen drivers maim and kill themselves in a hundred different ways over the years. There might not be anything to hit out on the salt, but when things go gnarly, cars can tumble for hundreds and sometimes thousands of metres. Such catastrophic incidents are mercifully rare, but the SCTA learns from them. It’s this process that has shaped the specialised rules, regulations and cars that run here.

‘Bale-out’ is one of the more sobering parts of Tech Inspection, for it’s where a driver has to prove he or she can pull the parachute, hit the extinguishers and operate the master switch, ignition and fuel pump switches then extricate themselves from the car in double-quick time. Sounds simple, but when you’re strapped into your seat so tightly you can barely breathe, have your helmeted and HANS-restrained head literally wedged between the wings of the metal seat’s head support, have your arms tethered by straps and are fully togged-up in a Top Fuel-dragster-spec firesuit and gloves, it’s anything but easy. I manage to drag myself out with the requisite urgency, but still I’m left with a lingering tinge of anxiety fizzing in the pit of my stomach. It might ‘only’ be driving fast in a straight line, but Speed Week is clearly a serious and dangerous business. 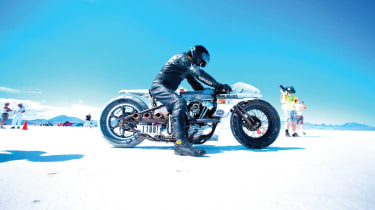 There’s a record entry of just under 600 cars and motorcycles for this year’s Speed Week. Judging by the wide-eyed faces gathered around for the drivers’ briefing, that means a record number of salt virgins. If they’re anything like me, they’ll be experiencing a weird blend of apprehension, excitement and belonging. It might be new and bewildering, but if you’ve got the slightest drop of petrol in your veins, standing on the salt beneath Utah’s baking sun feels as right as anything can in life.

The white stuff is a weird surface on which to drive. First thing in the morning it’s sticky underfoot and cakes to car tyres and the soles of your shoes. As the sun begins to climb and the ambient temperature rises, the salt dries and hardens, but still it proffers very little grip. Imagine accelerating on something part-way between damp sand and freshly fallen snow and you get the idea. Because of its unique properties, all new drivers have to complete a mandatory rookie run on Course 4, the shortest on the salt at just three miles. There’s no minimum speed limit, but you’re strictly forbidden to exceed 150mph, as the objective is to prove you can operate your car safely and follow instructions, not break records. However, if you can average anywhere between 125 and 150mph you qualify for a D licence test as well as shedding rookie status.