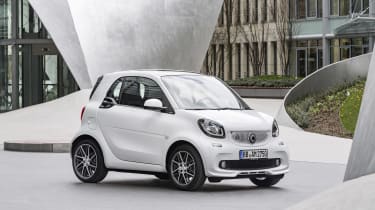 Smart has revealed the model evo has been waiting for since we first tested the current generation Fortwo: The Smart Brabus.

Available in coupe, convertible and Forfour variations, the Brabus-tweaked Smarts feature brawnier versions of the firm’s 898cc three-cylinder turbocharged engine, fatter tyres and suspension changes, giving them the character – if not the outright performance – of Brabus’s better-known performance saloons.

The three-pot’s power has risen to 108bhp at 5750rpm, with 125lb ft of torque from 2000rpm. That’s up from 89bhp and 100lb ft, thanks to increased fuel pressure, and better breathing both on the induction side and exhaust, via a Brabus sports exhaust system.

A revised version of the ‘Twinamic’ six-speed dual-clutch transmission also aids performance, with response times cut by 40 per cent and shorter ratios. Combined with a ‘Race Start’ function, the Fortwo will skip to 62mph in 9.5sec and hit 103mph. Cabrio performance is identical, while the Forfour will hit a higher 112mph top speed but take a second longer to get to 62mph. 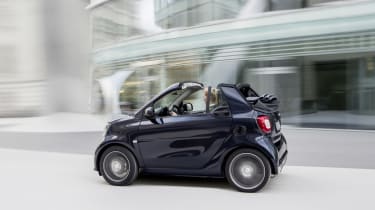 To us, those figures sound a little disappointing – the old Fortwo Brabus with its click-wait-shift automated manual could lurch to 62mph in 9.6sec and the even older, Mitsubishi-based Brabus Forfour dispatched the sprint in 6.7sec before hitting 137mph.

But that old Fortwo was lighter than the current model, while the old Forfour had the stabilising benefits of a front-mounted engine and front-wheel drive.

Perhaps the new cars’ handling (certainly not a strong point of the old Fortwo) will make up for it: dampers are 20 per cent firmer than the existing Brabus accessory sports suspension for the Fortwo/Forfour models, there’s an anti-roll bar at the front axle to cut tilt by 9 per cent, and the ESP has been ‘specially adapted’.

The steering too has undergone work. Smart claims extra feedback, though we’ll wait and see – the variable-rate rack has ‘increased return torque’, which suggests extra weight rather than necessarily any more feel. 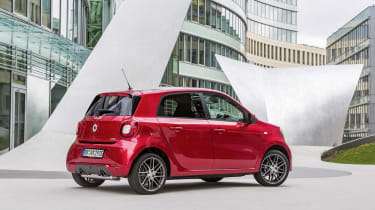 Visual changes echo those of previous Smart Brabus models. Brabus Monoblock IX alloy wheels fill the arches – a 16in/17in front/rear mix on the Fortwo, and 17s all round on the Forfour – with 185-section front tyres and 205-section rears on each. Diffusers, chrome tailpipes and a single-colour scheme (rather than typically two-tone standard Smarts) complete the exterior look.

The trio are nearly as economical as their standard counterparts despite the extra Brabus addenda, with up to 62.8mpg (and 102g/km of CO2) in the Fortwo, and 61.4mpg on the Cabrio and Forfour.