Not much was known about Subaru's FT-86 sister car, but an interestng concept has been displayed at Geneva, raising even more questions 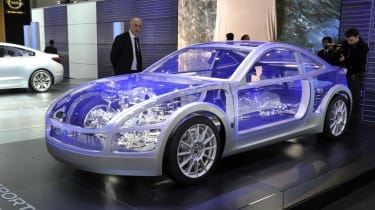 Dubbed the BOXER Sports Car Architecture Concept, we know that it will use a naturally aspirated boxer engine in the vain of all other Subarus but, in a departure for the firm, will be rear-drive only. The concept rides on seventeen-inch wheels but there is little else to reveal apart from this because the concept car lacked any body panels. Using transparent plastic to cover the internal components, the Boxer concept looks like little else at the show. Both the Toyota and Subaru are set to appear again at the Tokyo motorshow later this year before a full debut in 2012 so expect a more complete styling effort when the ‘Toyobaru’ makes its home debut later in 2011.

Also shown at Geneva was Subaru’s Impreza Concept. Subaru has said it will express Subaru’s core brand value of ‘enjoyment and peace of mind’ and promises an‘engaging yet safe and comfortable ride’. The concept is 4.5 metres long, 1.8 wide and just over 1.4m tall and, surely in a bid to appeal to Subaru aficionados, was shown as a saloon only.

Few details have been released yet in terms of technical specification. All we know so far is that the concept follows the traditional Impreza layout of a 2.0 litre, four cylinder boxer engine and four-wheel drive. The concept puts its power through what Subaru calls a Lineartronic gearbox, their version of a Continuously Variable Tranmission (CVT).

To read about the Toyota FT-86 sister car click here