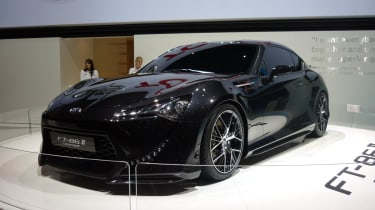 In a joint Toyota/Subaru effort, the FT-86 is a slightly different take on the  classic performance car formula. Front engine, rear-wheel drive, small lightweight coupe body but with a 200bhp flat-four boxer engine. This latest show car is pretty close to being production ready, and is scheduled to go on sale in 2012.

The ethos behind the FT-86 is to keep size and weight down. The relatively powerful 2.0-litre flat-four engine will provide enough power for a sub 7-second 0-60 time. Both the drivetrain and driver have been set as low and as far back as possible to optimise balance for maximum poise, high-speed stability and agility. Toyota says: 'This gives the car lively, accessible performance that is easy to harness and enjoy.'

Toyota has been missing a truly great rear-wheel drive performance car since the MR2 was phased out in the 2007. The FT-86 II concept is proof (aside from the Lexus LFA!) the that the Japanese manufacturer is trying to rectify the problem. It would be easy to say that the FT-86 is a tribute to the classic 2000GT or Celica, but it isn't. Toyota want to bring back the Corolla AE86, the car that spawned a generation of 'drifters' in Japan - and has now attained cult status.