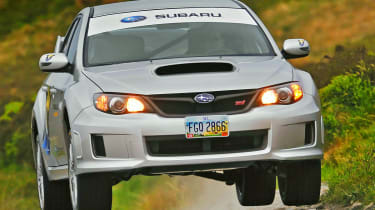 One of the longest standing – and least likely – UK speed records has been comprehensively demolished. The car lap record for the Isle of Man TT Circuit had stood for 21 years, but yesterday rally veteran Mark Higgins smashed it in a Subaru Impreza WRX STI.

Manxman Higgins posted a time of 19:56.7 for his first ‘demonstration lap’ of the 37.8-mile TT Course in what's described as a ‘lightly modified’ STI – translating into an average speed of 113mph. That’s over two minutes quicker than the record set by Tony Pond in 1990, when he set the first ever 100mph average lap using the somewhat improbable tool of a Rover 827 Vitesse.

Higgins admitted he could have gone quicker, and the Subaru also suffered from brake fade towards the end of the lap. He averaged 124mph for the section between Douglas and Ramsey, and even at the top of the mountain section he was still on course for a 120mph lap. With further runs scheduled for Wednesday and Friday as part of the TT race week, expect the record to come down even further.

Pond’s record stood for over 21 years in large part because more modern machinery wasn’t given the chance to challenge it – but it was still a remarkable piece of driving, the late rally star showing impressive commitment as he hustled his big Rover around the circuit. For reference, the fastest ever lap of the circuit is the bike record set by John McGuinness in 2009 on a Honda CBR1000RR racer, his time of 17:12.3 translating into an average speed of 131.5mph.