Subaru has released computer generated images of the new BRZ coupe in STI form, ahead of its unveiling at the LA motor show 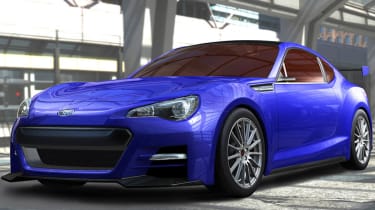 Hot on the heels of images of the new Toyota FT-86, Subaru has released some images of its 'sister' car - or, at least, yet another motorshow concept hinting at what the finished product will look like.

At least this one is close to reality, in terms of time if nothing else. The BRZ STI will be shown at the LA motor show later in November - and the production version of Subaru's coupe will be unveiled at the Toyota show, less than a month later.

Thh computer renderings show a car that shares its fundamental proportions with the Toyota version, while having more aggressive bodywork. We know that Subaru and Toyota versions are going to share their major mechanical components - both will be rear-drive only, and normally aspirated. But while the Toyota will have around 200bhp, the Subaru version is set to go into battle with something closer to 300bhp from a tuned version of the same flat-four 2-litre boxer engine.

The STI concept also has a lower front spoiler - plus a rear wing that's claimed to deliver downforce. Subaru also say that it will have a carbonfibre roof to lower its centre of gravity. Production of both the Subaru BRZ and Toyota FT-86 will begin in spring next year.