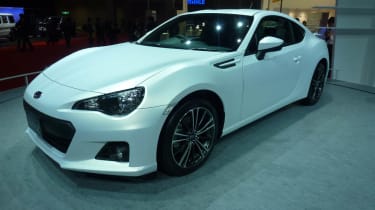 The Tokyo motor show marked the debuts of both the new Toyota GT 86, which we brought you official pictures of earlier in the week, but also it’s half-sister the new Subaru BRZ, which we finally got a chance to see in production form.

The highlights are as we expected, with confirmation that both Subaru and Toyota versions of the car will share the same engine and powertrains, but also the same horsepower figures – the BRZ having an identical 197bhp from its 2-litre four-cylinder boxer engine.

And the similarities continued on Subaru and Toyotas’ stands, with first impressions being just how similar the two cars are to each other. Apart from different front and rear bumpers, it’s only detailing that sets the two cars apart, with the Subaru getting a cheap-looking psuedo side air intake where the Toyota has an ‘86’ badge mounted. It’s going to be very interesting to see how the two companies spin a different marketing message for two such similar cars.

Getting close to the Subaru also gave a chance to confirm that it’s a proper sportscar. The seating position feels very low – the official claim is that the two cars’ centre of gravity is one of the lowest ever found on a roadcar. And although you wouldn’t say that the ‘plus two’ rear seats give the BRZ everyday practicality for those with a family, they’re certainly useable for shorter journeys. Folding rear seats also give it a surprising measure of practicality – Subaru claims that one of the benchmarks was the ability to drive to a race circuit with a set of spare rims and tyres onboard.

Another interesting development came from talking to a senior Subaru engineer, who confirmed that early media reports the car would have a 155mph limiter have been off-target. ‘There’s no need for a speed limiter,’ he told evo – the car’s top speed, as yet officially unconfirmed, is apparently 230km/h, or 140mph.

Now we’re just itching to have a go in it – watch this space!