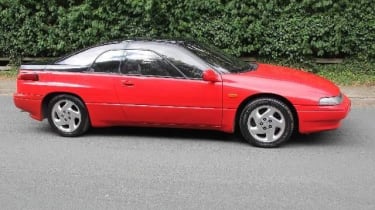 We usually try and apply some relevance to the cars featured in Just Looking – reference to something we’ve driven in the preceding week for instance, or a way of getting similar performance with greater character on the used market.

This week’s link is a little more tenuous, as it’s through manufacturer alone. Having driven Subaru’s latest turbocharged Forester it was tempting to hunt out one of the rare imported STi versions, but there were none to be found on our sister site, Classic and Performance Car.

What we did find was a tidy example of one of Subaru’s most rare and unusual cars, the SVX. For sale at the Classic and Sportscar Centre on the edge of the North York Moors, it’s another reminder of just how innovative the Japanese car industry was during the country’s bubble economy of the 1980s.

It was, like the vast majority of Subarus, equipped with full-time all-wheel drive. And it also used a boxer engine, allowing a typically low bonnet line for sleek, sports car proportions.

More unusually, that engine was a 3.3-litre, four-cam, six-cylinder unit, producing a respectable 231bhp. While that didn’t put the SVX on the same level as its contemporaries – think Supras, RX-7s and 300ZXs – it was enough to project the relatively heavy (1590kg) SVX to 60mph in 7.3sec and 154mph. 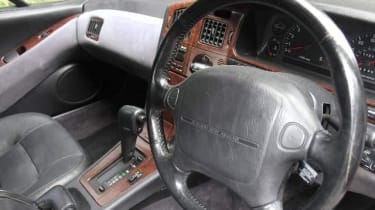 Sadly, the SVX was auto-only, though this did add to the relaxed, GT-like feel of the sumptuous cabin (of which this example boasts a fine example). Most notable of all though was the SVX’s styling.

The work of Giorgetto Giugiaro, then at ItalDesign, the SVX made its debut as a concept in 1989 but changed little for production in 1991. The shape is most notable for its glassy canopy and split side windows – usually a detail seen on cars with scissor or butterfly doors (like the contemporary, and equally glassy Toyota Sera), but the SVX’s doors were conventional.

With fewer than 25,000 sold worldwide between 1991 and 1996, SVXs are rare – particularly in the UK – so seeing a clean example always raises and eyebrow. That lack of popularity originally means prices are still fairly low and this car, with a comprehensive service history, is a relatively modest £5995.

It won’t handle like a BRZ, and it doesn’t quite have the all-round practicality of the Forester STi we were searching for, but as a significant part of Subaru’s heritage for not a lot of money, it’s curiously appealing.

> Find Subaru SVXs for sale on Classic and Performance Car