Proving there’s still life in Subaru’s STI performance sub-brand, the Levorg has benefited from some tweaks 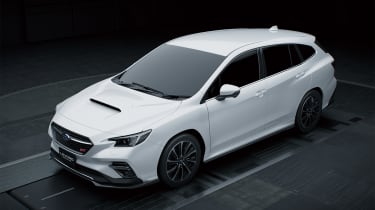 Subaru’s slow progression towards obscurity in the UK might disappoint fans with a disposition towards its iconic performance models of the 90s and early 00s, but Subaru’s focus on sensible motoring has worked wonders for its global presence. With sales higher than ever thanks to booming popularity in the US and Japan, it’s not surprising to see Subaru's low-volume niche performance models taking a back seat. The iconic STI brand isn’t dead quite yet though, with Subaru revealing a prototype version of its all-new Levorg STI with that little pink badge on its tailgate.

This is not a full-fat STI model in the mould of Subaru’s now dead (in the UK at least) WRX STI, rather a showcase of new STI parts that will be available on the incoming Levorg through dealerships in Japan and later, other international markets.

Specific technical details have not been released, but Subaru has confirmed that the latest-gen Levorg will be available with a wide range of firsts for the marque, including adaptive dampers (perhaps a bit behind the curve there) and satellite referencing for the Levorg’s autonomous driving elements.

The standard Levorg prototype (which was nothing more than the production version with prototype written on the marketing material) features a new turbocharged 1.8-litre flat-four engine, paired with a CVT transmission and Subaru’s usual all-wheel drive system. Aesthetically, the STI differs little from the standard Levorg Prototype, with some new front-end styling inserts within the existing bumpers up front, fresh wheels and some gloss black skirts all the way around. 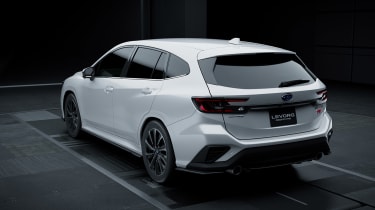 Subaru has not confirmed whether we’ll see this new generation of Levorg in the UK, but it’ll be especially difficult as fleet average emissions regulations tighten, forcing less efficient models off the road if not equalised by EV and hybrid models to offset them.