Subaru BRZ review – New updates for 2017 refine the fun coupe, but only slightly - Ride and handling 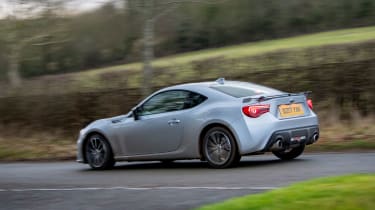 Rather than ultimate pace the BRZ is about low speed thrills and establishing a deep relationship with the car’s mechanical components. The latter goal means that the BRZ isn’t a calm or quiet place to be, and tyre and drivetrain noise are constant – you can even hear the layshaft in the gearbox chuntering away with the engine at idle.

The BRZ’s ride is firm too, and if it wasn’t for a pair of comfortable, well padded seats that you can move to get the perfect driving position, it would be a rather uncompromising environment to spend time. But this lack of comfort and refinement is replaced with an exact knowledge of what the car is doing and real understanding of how it might react; far more beneficial in a sports car than extreme comfort.

The Subaru feels light and big bumps can cause it to deviate from your desired path, but as the BRZ is also small and narrow there’s usually plenty of room on the road for it not to be nudged into a dangerous position. Its lack of mass helps the body feel incredibly well controlled, and no matter how fast you travel over the harshest of crests the body reacts with minimal fuss.

For the 2017 model, Subaru has altered the BRZ’s dampers to reduce body roll, but the changes are minor and the car feels much like the BRZ always has done. On the road there’s no hint of understeer, and every tweak of the steering wheel makes the car rotate. This dogged intent to turn rather than roll is impressive but can be slightly unnerving thanks to Subaru trying to minimise the BRZ’s traction with thin, low grip tyres.

The only time you don’t feel intimately connected with the road is just after turn-in; the steering points the nose exactly where you want it but you’re left hoping the rear tyres will grip. For the most part, and when you want it to, the BRZ does find enough grip, but that brief moment when you aren’t sure is worrying and contrary to the way the rest of the car feels.

Our experience with the similar Toyota GT86 is that this issue can be solved with better, more performance-oriented tyres. Also, the higher grip levels from stickier tyres don’t ruin the car’s ability to move around and slide on the road, and its engineered-in balance still makes it possible. In fact, the extra connection you get from the better tyres means you are then able feel your way right up to and beyond the levels of grip and makes driving the car harder far more satisfying.

On the original Michelin Primacy tyres the BRZ is still fun though, but even with less grip there’s always the feeling the Subaru could cope with more power. UK based tuning company, Litchfield, offers a supercharger upgrade that gives the BRZ 280bhp to help solve this. Along with this extra firepower Litchfield has also upgraded the chassis and tyres to cope. 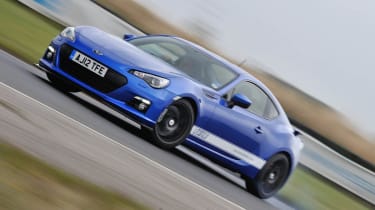 The Litchfield package, called the Spec S, has useable torque while retaining the rewards at the very top end. The engine still sounds rather strained and the whine of the supercharger adds to the racket, but it finally provides you with the power to work the chassis hard whenever you want to.

The result is that the Spec S oversteers everywhere: either a little bit when you’re on a timed lap or a lot when you’re just driving for fun. With the predictable torque curve and the excellent turn-in response, the BRZ enters into a slide with real progression. You need to be quick to catch it comfortably, but once you’re on top of the car everything happens in slow-motion. To use a cliché, you genuinely steer the car on the throttle more often than not.

It’s a well-judged package of upgrades and delivers on the promise of a chassis that’s been crying out for more power. We love it.

‘First, it doesn’t sacrifice to any understeer turning in. Secondly, although very firm, the suspension is so well controlled by the damping and the chassis so well balanced that achieving and maintaining a neutral attitude requires no special expertise. And thirdly, you can more or less give it the lot on the exit of a bend in the dry and harness all the drive the engine can deliver.’ David Vivian, contributing editor, evo 204.