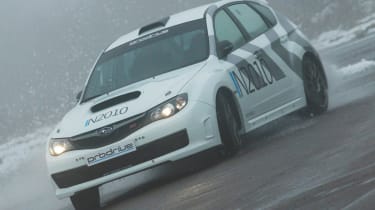 The rally gurus at Prodrive have unveiled the 2010 Group N Impreza, imaginatively dubbed the N2010.  The key change to this car for the new season is a larger airflow restrictor (33mm, up 1mm from 2009). The FIA has enlarged the accepted restrictor size to try and bridge the gap between group N and the unrestricted Super2000 class cars. Together with some slightly bigger fuel injectors and a tweak to the Pectel-Prodrive ECU, an extra 20bhp is the bottom line. More importantly though, driveability is improved thanks to better throttle response and more torque over the whole rev range.  Chassis tweaks are another factor ensuring the N2010 will be able to be competitive in Group N. Ohlins dampers are supplied with longer travel at both front and rear. Suspension bushes have also been beefed up, better to cope with the rigours of rallying. The net result is a car which can equal S2000-spec cars on gravel, and perform significantly better on tarmac thanks to the 2-litre boxer engine’s extra power.  This is one exclusive Scooby. Prices start at £120,000, although this year Prodrive will be offering a lease option over two years, with the option to buy the car outright at the end of the agreement. They’ll even chuck in insurance and system rebuilds.