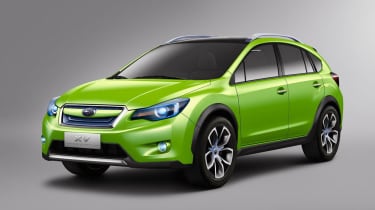 Subaru has just unveiled the XV Concept at the Shanghai motor show, an all-new crossover that is set to rival the Nissan Qashqui and Ford Kuga in the European market.

The XV will be based on the Impreza and is a showcase for the company's new design direction - Continuing on the theme of the 2010 XV concept that appeared at the Geneva show.

It will be available with the 2.0-litre petrol or diesel boxer engine, and Subaru's outstanding all-wheel drive system as standard, but there is no word on a performance variant yet. In usual Subaru fashion, the XV is said to combine practicality and off-road ability with a 'Playful Nature', ensuring it is as good on on the road as it is off it.

Expected to go on sale at the beginning of 2012, Subaru has given no hint on prices, but it is expected to start from around £20,000.