More power, more presence, but is it enough? 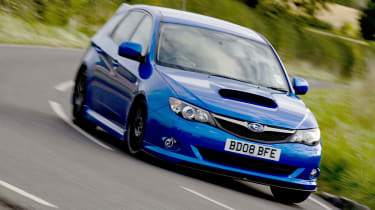 The WRX hasn’t exactly had an easy time since it was launched. Pilloried for its looks and vilified for its lack of steering feel, it must have felt like the child whose jersey was stolen for a goalpost but who was then left until last standing up against the wall when the teams were picked. So, with this in mind, Subaru has decided to equip the WRX with a touch of its bigger brother’s looks, some new boots and a heftier kick from its flat-four.

It’s called the WRXS and initial impressions when you walk up to it are good. The STI lip spoiler (which, slightly confusingly, isn’t even standard on the STI), rear wing and front grille all combine to subtly pump-up the WRX’s appearance, yet none of the extra bits looks like an Airfix afterthought, which is a relief. The rather delectable 18in anthracite wheels are an inch larger than the WRX’s alloys too, and also help to bolster the car’s image.

Subaru seems to have been avoiding its trademark WR Mica Blue with the new-shape Impreza. I’m sure the thinking must have been that a fresh, non-rally-obsessed audience should be appealed to with the all-new hatchback. However, since the launch I’d imagine that an uncomfortable realisation has crept over the company that it’s not exactly tearing chunks out of Golf and Focus sales figures. So WR Mica Blue is back, and if you ask me, it looks great.

Prodrive has, in time-honoured fashion, fiddled with the boxer’s ECU and modified the exhaust system to release the extra pep. Power has increased from 227bhp at 5200rpm to 251bhp at 5400rpm, but more impressively torque has leapt from 236lb ft at 2800rpm to 288lb ft at 3000rpm. As a result, the 0-60mph time has dropped from 6.1sec to 5.5, although the top speed remains at 130mph. This all seems like great news, but I’m slightly curious because the old Prodrive Performance Pack that could be fitted to the previous-generation WRX (with the same 2.5-litre engine) raised power to 266bhp and torque to an awesome 310lb ft…

Nevertheless the WRXS is noticeably improved over the standard car. With that lovely torque-rich in-gear flexibility and the novelty of a five-speed gearbox, progress is almost as quick but slightly less frantic than in the STI. The steering still feels woefully slack around the straight-ahead, but the bigger wheels have given it a little more sharpness. Despite the added grip, the suspension itself still creates comic angles of lean in the corners. This ensures that seemingly no matter how severe the mid-turn bump, the wheels will always have enough travel to stay in contact with the tarmac.

Admittedly, there aren’t many bends you can do it on, but the most entertaining way to go around corners is to trail-brake heavily as you turn in, which then gets the back swinging round with momentum. You can then hold a nice four-wheel drift as you get back on the power (providing you’ve turned VDC – Vehicle Dynamic Control – off).

The WRXS certainly does what it set out to do; for an extra £2400 it both looks and goes better than the standard version. Overall, however, it still feels very much like a last-generation car, and that really isn’t good enough.