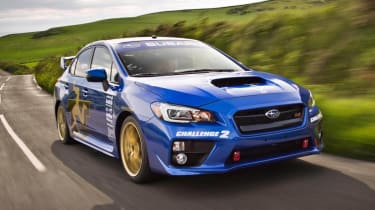 The four-wheeled Isle of Man TT lap record has been broken. Subaru has used the 2014 event to eclipse its own, 2011 record. A lap time of 19min15.88sec is over 40 seconds quicker than the record posted three years ago.

Reliable components were used for Subaru’s attempt on its own record – Mark Higgins once again took up driving duties, while a near-standard specification WRX STI sports saloon (albeit the latest 2015 model year car in this instance) was his tool.

The US-spec car retained its 296bhp 2.5-litre boxer-four engine, with small suspension tweaks to help it negotiate the TT track’s copious bumps and jumps plus some motorsport-minded additions in the shape of a rollcage, fire extinguisher, race harnesses on the seats and some sticky Dunlop Direzza tyres.

Higgins said: ‘It was quite a lap we did today and I am really happy to have another record in the bank. The chassis of the new car is so much better it really allowed me to pick up time in each sector in the more technical parts of the course.

‘There is nothing like the TT course in all racing. Not just because of its length but the elevation changes, constant surface variations as you shift from town to country roads and the fact we run from 30mph and then up to 160mph plus for much of the race.’

Higgins had originally broken his own record with a 19m26s lap, but keen to clean up some mistakes, he returned to the course to slice another 11 seconds from this. That means an average speed over the TT loop of 117.510mph – still a little way off the 132.298mph average of Bruce Anstey’s motorbike record, the result of a 17:06.682 lap…

You can watch some enthralling on-board video of the lap – complete with descriptive commentary – above.